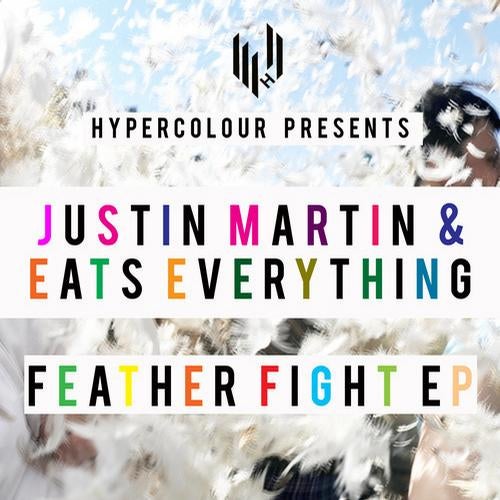 DJ Magazine's Label Of The Year, Hypercolour, continues its ongoing success story apace with a release befitting the high accolade the label has just received. It sees a high-profile collaboration between the aforementioned publication's DJ Of The Year, Eats Everything, and the natural heir to Claude VonStroke's Dirtybird crown, Justin Martin. Easily two of the most prominent electronic music success stories of the past 12 months, the duo put their heads together during a week-long Bristol studio session in November before a much lauded back-to-back performance at Motion nightclub. The result is this two track EP of contrasting styles and conception-challenging sounds. The opening offering on the EP, 'Feather Fight', sets the tone with more of a jacking house rhythm. The track progresses to its mid-point with a continually rising, paranoid note hinting at something sinister before it breaks into a melange of warbling synths and soft bassy undertones that are rich in variation. It's an instantly addictive and subtly infectious track that sees both producers exercising restraint to create a production with that 'get in your head' quality. The second track, 'Harpy', is similar to the first in that lures you into a false sense of the security. Its opening lines are all ambient harps and soft string textures with the vocal telling you it's "time to let go", before melting away in dramatic fashion with a fog-horn blast. The rest ofthe track is an ode to these rich contrasts, with the harp continuing to play its part as well as the broad, depthy bass weight. Two of the most effervescent characters in house music have penned an EP consistent with their brilliantly colourful personalities, and in the process Hypercolour continue to confound expectations with something far removed from previous offerings.