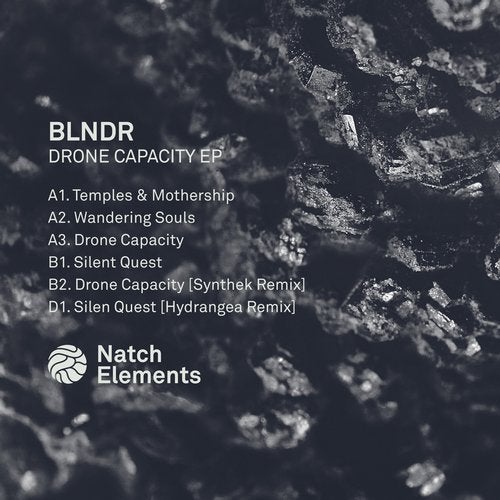 Natch Elements debut with Drone Capacity Ep by the uprising deep techno talent BLNDR. The french producer delivers 4 cuts delineating the primary label's aesthetics, additionally twisted up and remixed by label boss Synthek and compatriot Hydrangea. The record's intro is the ethereal Temples and Mothership, welcoming the listener to a sonic journey which takes the first beat/steps with Wandering Soul. This second cut is made out of fragmented drums alternating a solid kick and delayed vocals. Closing the first side, we find the powerful Drone Capacity, track which gives the title to the release, setting the pace higher and bringing a significant amount of energy in the game. On the flipside, the mystical groove of Silent Quest reveals some deep jungle's secrets and leaves the closing duties to razor-sharp Synthek remix of Drone Capacity which reworks the original elements adding heavy pressure and dancefloor vibes. Left out of the vinyl length the beautiful atmospheric rework of the evergrowing Hydrangea, drawing an alternative, more spacious and organic vision of SIlent Quest. This last cut will be available for free download in the same time of the physical release. NTCEL01 sow the seeds of a new catalogue that supports artists with certain attention for deep and detailed compositions.