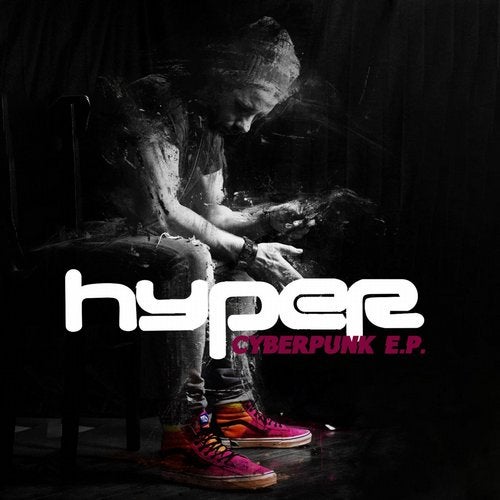 Hyper is back and his recent move to Seattle (home of legendary label Sub-Pop and many of the bands that soundtracked his youth) has sparked a renewed vigour and focus for his musical output!

His sound remains highly energetic and tightly produced as you would expect. Now however, it's bigger, darker, more dynamic and cinematic as he prowls around the 100 bpm mark, slowing things down and layering guitar distortion over his electronic sensibilities for a grungier, more lo slung sound. Think of his 'Lies' album, (the tracks 'Clockwork' and 'Spoiler' in particular) add some, and you're in the right ballpark. In fact, think 'Cyberpunk' and this is what may well come to mind, a genre free sound fusing Techno and Punk influences set in a world of Vangelis' and Scotts vision for Bladerunner… (indeed Hyper's 'Spoiler' track has been featured on the 'gone viral' trailer to forthcoming CD Projekt Red video game "Cyberpunk 2077' and it couldn't be a better fit.)

This EP opens as it means to go on with 'FCKD', smacking you straight in the face with a relentless wall of arpeggiated sound featuring a sneering vocal sample 'Everytime you're playing music for the crowd instead of yourself, you're fucked!'. Hold tight…

Hyper (real name Guy Hatfield) has utilised the quiet/loud dynamic (a feature of the Seattle 90's Grunge sound) for both the 'New Wave' and 'Flatline' tracks for maximum impact.'Flatline's quiet moments of layered textural beauty, sound design and analogue synths explode into one of Hatfield's trademarks: writing basslines as if they were rock riffs. This one is one of his finest. The drops are absolute carnage..

'New Wave' starts in the 80's and smashes into NOW before breaking down to beautiful chords and from there… …well, you'll see!!

'Drive' wraps up the EP beautifully and has been in part inspired by Hatfield's recent dabbling with film scoring. A beautiful piano melody is soon interrupted by the relentless guitar riff which becomes the cement holding this exercise in tension building together. Strings, otherworldly rises, live bass and breaks are other elements introduced as the track builds towards a frenzied crescendo….

2019 is a very exciting year for this producer as he refocuses his attentions Stateside. Look out for at least 2 movies with his name attached to them and the new Porsche 'Cayenne' ad which also features his work.