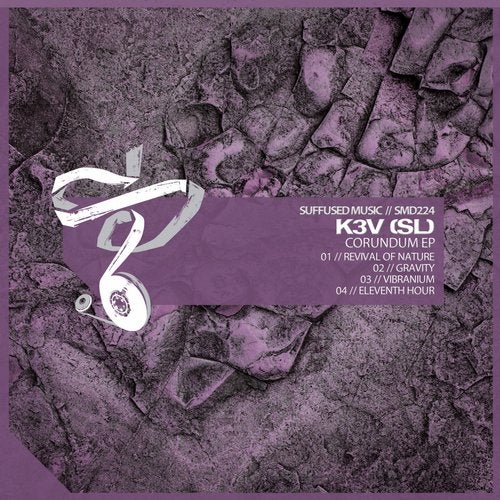 K3V returns to Suffused Music for his debut EP entitled 'Corundum'. Having first appeared on the Lithuanian imprint with a contribution to the label's 'Initializing' Vol. 17 Collection, K3V also owns releases on Aly and Fila's FSOE UV imprint where he collaborated with Paul Thomas on the club hit 'Aquamarina'. Now returning to Suffused Music for his first artist showcase K3V presents four fresh originals.

The release begins with the infectious grooves of 'Revival of Nature'. Backed by tough beats and chunky rhythms it's perfectly dialled for the dance floor. Vocal samples enhance the narrative, bringing a mysterious tone to it's potent drive, before glacial effects initiate a tripped out, tension filled break. Perfectly executed, it's a momentous build, complete with swirling atmospherics, before a powerful drop summons a strong final act. The mood goes a touch deeper on 'Gravity' with a funkier, more spacious foundation carving out the journey. Phasing atmospheres converge with melodic concepts as indistinct radio transmissions fire through the framework. A near three minute interlude unites the two acts with a cinematic flair before looping vocals take you into a groovy finale.

'Vibranium' maintains the electric feel of the EP and at over ten minutes in length it's also the most expansive track on the collection. Anchored by a traditional progressive groove it's galloping roll immediately draws you in. Shifty harmonics add melancholy to the narrative before becoming fully realized during the main break. Much like 'Gravity' it's a near three minute journey of subtle shades and tones before eventually peaking in intensity for a wondourus crescendo. The release concludes with 'Eleventh Hour' which also featured on the previously mentioned 'Initializing' Vol. 17 collection. It's an energetic, crunchy progressive bomb that's perfectly dialled for a peak time dance floor. It's rough, chugging groove is ripe with character, while an array of cosmic effects and tantalizing melodies converge for an exhilarating apex. It rounds out a superb debut EP from K3V, who is definitely an artist to keep a close eye on as 2018 progresses.