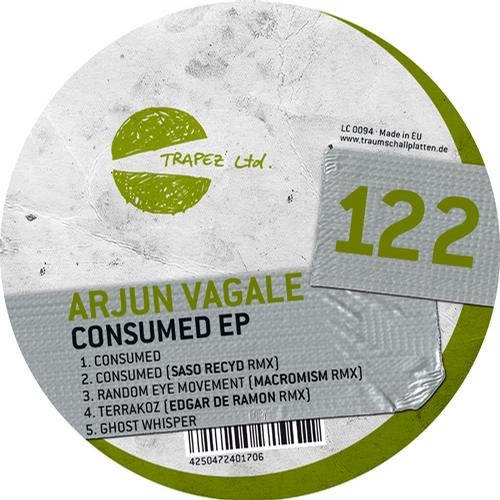 Arjun Vagales trax are always a guaranty for trax that work in multiple ways. They are great DJ tools but they can also be enjoyed by people with a keen ear for details.
"Consumed" is such a track and it is again a big tune for DJs. A track that picks up on Detroit sounding synths and Chicago down pitched vocals, cool 303 like sequences, but also features thousands of small and lively sounds that vibrate as rainforest sounds do. Yes and what we forgot to mention here is Arjuns stunning break down towards the end of the track which has an epic dimension and makes the return of the beat so special. That's a big one for Arjun.

Saso Recyd has remixed "Consumed". Saso Recyd is known for his melancholic and mystical music and has already released on Plus 8, M-nus, and Rawthentic Music. His remix for Arjun Vagales track "Consumed" is defined by a minimalistic-dry percussion programming that seeks its counterpart and hypnotic - strings "below the surface" und eruptive und sudden outburst of sounds, creating a tension and urgency to his nice remix.Macromism have written a remix of "Random Eye Movement".

Macromism have recently released on Break New Soil, Suara, Kling Klong, Kiara and SCI+TEC exciting music so we expected that they have a go on the remix and make it special.Macromism has transformed the original of "Random Eye Movement" into something breezy, sophisticated and personal. It is a symphony for the senses as it is awesome modern and retro in one. This should end up in DJ boxes and have clubbers bob up and down on dance floors.

Arjun Vagales track "Terrakoz", which we released on the prior release Trapez ltd 115 and which got big support from top DJs, is here remixed by Edgar De Ramon who has released on Thoughtless Music (Canada), Novotek (Spain), Suara and Dual Music among others. He has downplayed some of the hectic moments the original is known for but stays close to the original themes enhancing them with nice deeper moments for the DJs who want to keep a deeper profile.

"Ghost Whispers" is a mighty deep slacker of a track not as big time as "Consumed" but based on a seductive rhythm-beat construction that will carry you away for the time of being in a good way. The tracks turning point comes at 4.20 when house sounds kick in and create an interval of an intermezzo quite different from the main theme. on Telrae before.