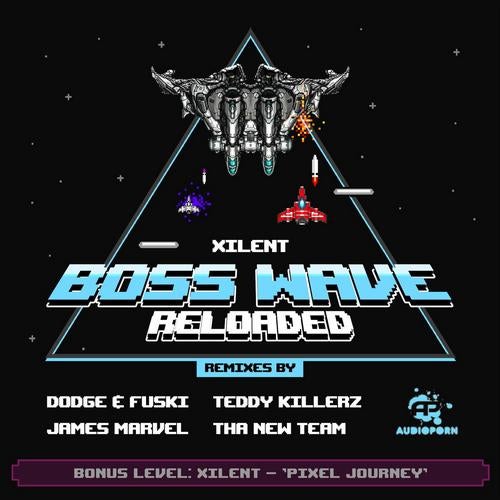 Pixel Journey
Whatever the bpm, whatever the style, a Xilent track is always unmistakably a Xilent track and Pixel Journey is no different. From the crunchy 8 bit beats and bleeps leading to filtered chords and the drop where big room summer synths layer over stomping mecha disco beats this could simply be no one else. That said, Pixel Journey takes Xilents signature style in a whole new direction, as though a big room Ibiza anthem has been fed through a Megadrive this is festival hands in the air goodness packaged with vocal clips and production flourishes making it one of Xilents biggest and most stand out tracks to date.

Boss Wave (Dodge & Fuski Remix)
Kicking of with a triplet time swing pattern then adding gameshow style synth run downs, the Dodge & Fuski remix really lets fly at the drop with stripped back marching drums and lashings of squelchy bass. This is a big room stomper which retains its tongue firmly in its cheek. A p-funk rave bomb to keep the feet moving and smiles wide.

Boss Wave (Teddy Killerz Remix)
Opening with the Boss Wave riff and a boom bip we will rock you style stadium drum pattern (with added vocoders), Teddy Killerz then fly into a rising drop until the track unleashes the dark side of Boss Wave. More R-type than Rainbow Islands this is a bass heavy dubstep growler that concentrates full on the low end with occasional metallic moans adding to the overall oppressive vibe of the track. A wicked take on Xilents original; taking things deeper and darker and a little bit nasty.

Boss Wave (James Marvel Remix)
Taking Boss Wave into DnB territory, the James Marvel remix initially retains much of the flavor of the original track but in addition to switching up the bpm also adds tearing sections of acidic bass to make this a clipped dancefloor smasher which will instantly stand out within the mix. It must also be added, that at the end of the track (and straight from the leftfield) comes a quite beautiful solo piano rendition of Boss Wave (played by James Marvel himself). If this is the first time you have heard of James Marvel, then feel privileged, this is the start of something very exciting.

Boss Wave (Tha New Team Remix)
Completing the package comes Tha New Teams drumstep rework which takes hints of the original Boss Wave melody and switches it up with tearing sci-fi mid range synths and glitched out bass runs to make a different step futuristic rave assault which will screw faces, stomp feet and delight those for whom production master-classes are the order of the day. Sublimely punishing.