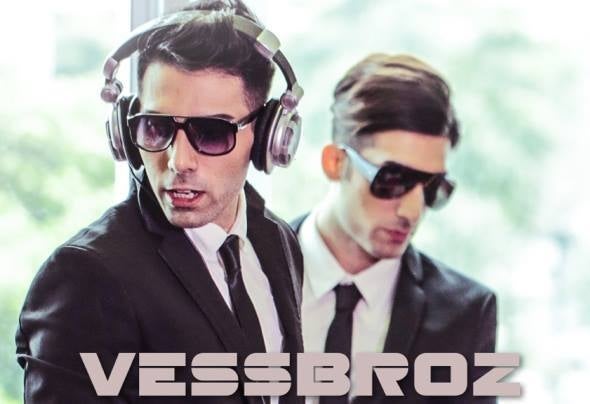 A bond created by music is hard to break, join this up with brotherly love and it’s a force that’s totally unstoppable. This is certainly the case with Armia and Arsham, better known as the Vessbroz, an electronic DJ/Producer duo whose back catalogue and fan base speaks for itself. With a background in classical music, their signature sound is best summed up as exquisitely produced, hard-hitting dance style with a touch of quirkiness, as the Vessbroz strive to constantly innovate themselves infusing their sonic palette with dashes of mainstream pop sounds to heavy dance floor grooves that grip their audiences. After gaining thousands of online followers through their music, the boys decided to take their creations to a new artistic level by creating and directing music videos on their Vevo channel which has led them to gain an incredible 2,000,000 views. Vessbroz’s list of career highlights is seriously impressive! Some of their achievements include an album release with Sony Records titled ‘Lost’, landing a top 100 spot in the Netherlands’ album chart and their single ‘Nothing’ reaching the top 40 positions on the US Billboard Chart for 7 weeks, whilst gaining support from the living legend 50 Cent. They also went on to be featured on the cover page of DJ Magazine and were the Official Coca-Cola DJ for the 2016 tour. 2019 has been nothing short of exciting for the duo so far, based in the home of dance music, the Netherlands they have managed to land on iTunes’ top chart in Italy with their track ‘Somebody’ and Beatport’s Big Room chart in June with ‘Alarm’, and Releasing one of their biggest release till today "Follow Me" with one of the best EDM record labels in the world, Revealed recording, and much more is yet to come. Bringing together their musical knowledge and extensive experience, the brothers have enjoyed international success and have had the opportunity to DJ all over the world. Arsham and Armia’s love for music branches out further than their own as they work hard to nurture and promote the talents of up and coming artist through their label Vessology Records and their weekly radio show Electro Vessel, which is soon reaching its 50th episode. This year alone, the duo have released some show-stopping productions such as ‘Somebody’, ‘Walking In Grace’ and more recently ‘Alarm’ and with plans of branching out further internationally and more creations on the horizon, this musical duo shows no sign of slowing down.