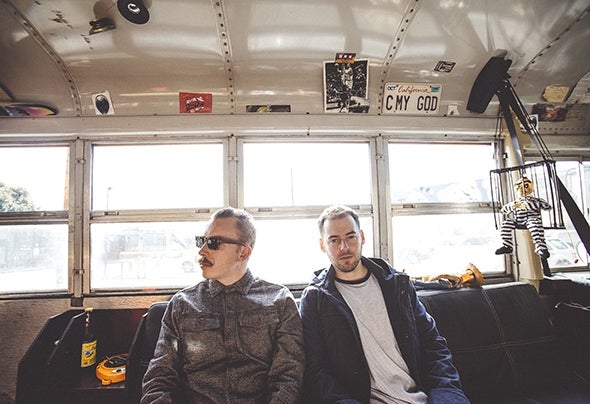 The M Machine is an electronic music trio hailing from San Francisco, CA. Formed in 2011 by Ben Swardlick, Eric Luttrell, and Andy Coenen, the group has quickly risen to prominence on the strength of their wholly original and forward-thinking sound.Transcending genre, the group effortlessly bounds between hard-hitting dance tracks and thoughtful, indie-styled vocal songs, tying it all together with a distinctly cinematic presentation. The group also designed, built, and performs its own live visuals in the form of a massive LED version of their iconic "M". It is this eclectic and all-encompassing approach towards their craft that has distinguished The M Machine as something very unique in the world of electronic music.The group achieved initial viral success with a teaser video for their two-part album Metropolis. The group's debut EP, Metropolis Pt. I, was released in April 2012 on Skrillex's OWSLA label. Inspired by Fritz Lang's seminal 1927 film Metropolis, the group created an entire mythology for the release, each song telling part of the story of the dystopian city of Metropolis. After an extensive run of official remixes for Bruno Mars, Passion Pit, Datsik/Kill The Noise, and Madeon, The M Machine have ret urned t o original product ion, elevat ing their craft to the rave reviews of their peers (read Skrillex, Porter Robinson, and Madeon). The second installment of their album, Metropolis Pt. II, released by OWSLA in February 2013, completes the saga ofMet ropolis and marks a new high wat er point in t erms of the group's creativity and production.In 2012, The M Machine performed at high-profile festivals including Electric Daisy Carnival (Las Vegas & NYC), Outside Lands, South by Southwest, Nocturnal Wonderland, Electric Forest, and Camp Bisco. Other highlights include a support slot for the entire "Language Tour" with Porter Robinson, and a support slot for Skrillex at Red Rocks in Denver. They also embarked on their first European tour, including stops at Tomorrowland and the Emmaboda Festival. With support from many of the world's most notable DJs, including Tiesto, Skrillex, Porter Robinson, Madeon, Markus Schulz, Benny Benassi, Zane Lowe, and Pete Tong, The M Machine continue to carve themselves a distinct niche in the ever-changing landscape of electronic music.