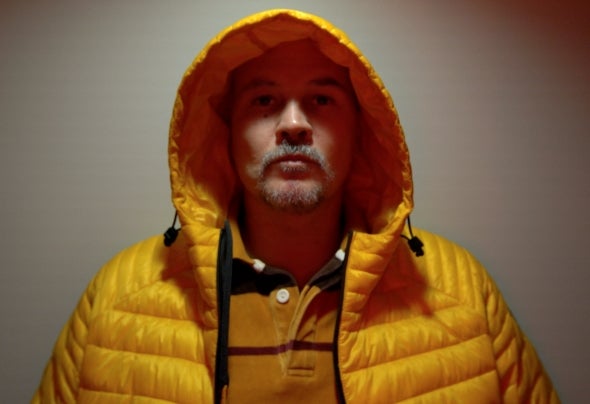 Sean Dimitrie To say that Sean Dimitrie is not your average Guitarist/DJ/Producer is definitely an understatement. From his pioneering live electronic jazz band Shazzam, to his first production house, which he ran at Gore St. in Vancouver, his first labels, Cache Records & P.F.B. Recordings to his most recent partnership with Nav Bhinder at Bombay Records, Dimitrie is forever expanding his horizons. Spreading his lush & sophisticated sounds throughout the world in many different ways has even included composing and supervising soundtracks to Canadian feature films. “I’ve become interested in managing and producing other Artists now, I don’t want to just be in the forefront as a Composer anymore.” To the international dance music community, Dimitrie is best known for his slamming remixes and original productions for such labels as Bombay records, Smash Hit, Leaf, Disorient, Transport, Village and BMG. Playing the regularly across North America, Asia & Europe, he has torn up dance floors from New York to Tokyo. His most memorable sets have taken him as far as Thailand where he performed at events such as Ko Phangan’s legendary Full Moon Parties. Ever in search of new inspiration, Dimitrie has also recorded all over the world producing live recordings with a wide range of gifted artists from Puerto Rico to Los Angeles. “Traveling gives you a good idea of what music is, because there’s different trends in different parts of the world at different times”. His signature sound behind the decks can best be described as ‘Nu West Coast’. With a strong jazz background, an unabashed passion for soul & funk, and a deep appreciation for the African percussive language, Sean Dimitrie is the walking and playing incarnation of sound and culture, ushering in a truly refreshing sonic approach to house music. “I can be as complex as I want to be, I have the technique now with computers to do anything I can imagine, or eliminate a wall of sound and keep things simple.” As one of the northern hemisphere’s brightest and most gifted musical forces, Sean Dimitrie’s star is constantly rising. Not only did he have the honor of producing and recording a live Roy Ayers ensemble show in August 2002 in Vancouver, Dimitrie has held notable residencies at the city’s top clubs both as a solo DJ and with Shazzam. ‘Fortune Fridays’ at Element allowed him to host Little Louie Vega, Rasoul, and Vocalist Lisa Shaw, and he has also DJ’d alongside such notables as Mark Farina, Johnny Fiasco, David Alvarado, Chez Damier, King Britt, Tim Shumacher, and Doc Martin. Dimitrie’s studio achievements are just as impressive. A producer since 1992, Sean studied Writing and Arrangement at Humber College, followed by a year of Jazz Performance at renowned McGill University Jazz Institute in Montreal. Most respected on a long list of multi-instrumental attributes are Sean’s abilities with the guitar, and where blues and funk have shaped his musical career, this is one area he has mastered. With influences that range from George Benson, Quincy Jones and Wes Montgomery to Masters at Work, it’s no surprise to learn Sean is adept at making magic with both live and electronic sounds. “Lately I’m so much more influenced by Producers than Musicians, a certain Producer on a project is reason enough to buy an album”. Amongst his collaborators we find Tim Fuller, DJ Ali, Thomas Osaze, Nav Bhinder, Vernell Delong, Rasoul, Gavin Bongo, Eddie Amador, SWAG & Christine Ngyuen. Dimitrie also has an impressive line up of Remix credits which include Nancy Wilson’s “If I had my way” and Kerri Chandler’s “Avareh”. Recent hits include his latest remix on San Francisco Label ‘Smash Hit’, of Jrod Indigo’s rendition of Prince’s “Indigo Music”, the international release of “PIMP” on Germany’s ‘Loco United’, along with “Precious Things” a collaboration with UK’s Rob Pearson, and Asad Rizvi,. Currently Dimitrie is busy extending his studio abilities into the artistic direction of his fellow label mates, while producing full-length projects with up and coming hip-hop artist Daybi, and singer/songwriter Tim Fuller. Outside of the studio, Dimitrie’s live performance with Fuller offers a very unique fusion of laptop technology and old school soul singing flair. “I think the direction of music is all going back to live – when Timmy and I perform it’s all improvised, I call it spontaneous composition.” Their latest hit singles ‘So Hot’ out on Odori, and ‘The Release’ on Manali Records, precede the release of ‘Go’ and Fuller’s full-length album, both on Bombay Records. Fans and future followers Dimitrie can also look forward to the debut album from Shazzam, an exquisite masterpiece in the down tempo acid jazz vein, also being released on Bombay Records in 2006.