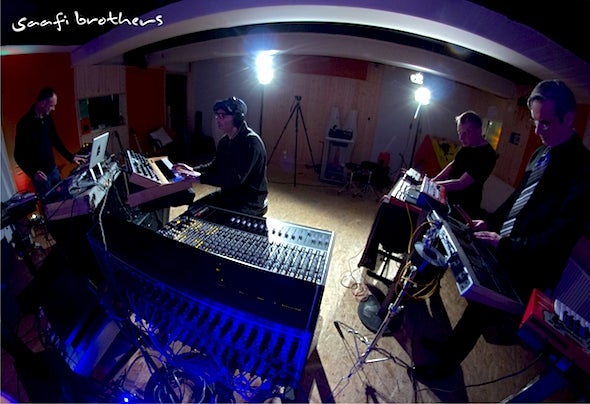 Music and ideas and the interaction process will always go on. With Live on the Roadblog Saafi Brothers tell us another short story. They walk a deep line between ambientdub orientation and blissed out beats. Sleepless-faced on music the Saafi Brothers digged deep into a series of "live recording sessions", rediscovering the emotional depth of "real-time created music" after a couple of live shows that fueled the idea of creating an entirely live recorded album. In a jammin ́ good time it became more and more developing into something more meaningful, working with lyrics to create moments that you never forget. Luca Anzilotti joins Gabriel Le Mar, Michael Kohlbecker and Groovetitan for this production. The crossing line in this axis is the storytelling aspect that is reflected in the directional lyrics, based on poems by George DIN. It ́s about to be off and to experience what there is to experience, being on the road and get a sense of freedom. Finally an undisputed link in the album is the balance of machine language and organic live performance that creates the man-machine aspects of electronic music in their very own language - and on the other side the overall layer is linked to Dub music, in style as a production technique and electronic music that mixes up with electro-acoustic live performance (guitars, electric bass, percussions) - all in real-time. The result is an organic flow and deepness in "Live on the Roadblog", linking the message like secret friends on the road.The Saafi Brothers debut Mystic Cigarettes came out in 1997 on the well known british label Blue Room Released,UK. With the internationally successful and today classic album the project consisting of Frankfurt/Germany based producers Gabriel Le Mar and Michael Kohlbecker immediately placed itself among the first row of the ambient and electronic scene. Tracks from the album have been released on numerous compilations, the extracted 12“ „Internal.Code.Error.930“ featured a remix by british techno/dub project Bandulu and became a club hit.After a long tour with numerous live and dj sets in clubs and at festivals the Saafis returned to the studio in early 2000 and delivered their second longplayer on Blue Room Released, Midnight’s Children. The album represented another perfect demonstration of the Saafi-style made up of the will to experiment and a feeling for the combination of different influences between West and East. The extracted 12“ „Into Deep Pt. 1+2“ found the way into many record bags of club- and radio-djs all over Europe, the b-side track „Not Fade Away“ featured guest producer Mike Maguire from british techno project Juno Reactor.Liquid Beach the third Longplayer of the Saafi Brothers will follow that way even with more innovative elements and deepnes s .They were part of the cultstatus titled and legendary german TV-show called SpaceNight on BR3 and asked for remixes for other artists, among them are reggae legend Bob Marley, leading german hip hop group Die Fantastischen Vier or british new wave poetress Anne Clark.With their album - Supernatural - the brothers made a strong musical relationship and combines electronic sounds from ambient to dub with world music influences. Their inspiration for their excursions through time, space and cultures comes from long journeys and triggers.A concept with the output that draws you in.liveIn accordance to their versatility as musical organizers and producers, Saafi Brothers live- and dj- sets also cover a wide spectrum of electronic music: they will take us on a trip through a variety of 4-2-the-floor-styles from deep TechHouse to energetic soulful Techno, merging their own productions with their selection into one mix.At alternative and chill-out floors, Saafi Brothers play ambient and dub as well as electronic sounds. So far, they played at huge festivals like Ozora/HU, Sziget/HU, Tribal Gathering/UK, Mjaft/AL, Roskilde/DK, Arvika Festival/SW, Vision/CH, Lovefield or Summer Jam and been guest in many clubs around the globe.