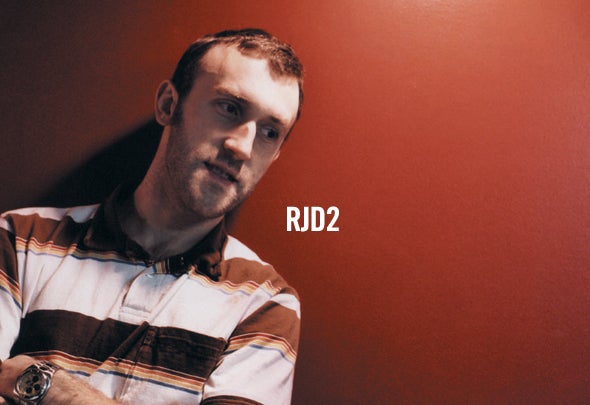 On his breakout solo debut, Deadringer, Rjd2 sent listeners on a musical foray into instrumentalism, feasting on styles both old and new, and in the process creating a sound that's emerging as one of the most interesting and exciting new voices in instrumental music. In a genre filled with ambient spacemen and droning techno fromage, Rjd2 brought a sense of song structure and vitality that was sorely missing, harkening back to a time when instrumental groups like Booker T. and the MG’s got radio play (no joke). And the accolades rolled in. From industry luminaries like Chris Blackwell, to members of Radiohead and The Strokes, to ?uestlove of The Roots (who nominated Dead Ringer for the prestigious Short List awards in 2003), to DJ Shadow, Rj soon became a favorite of those in-the-know. Dead Ringer was an incredible success globally, appearing on many a year-end list, including Spin's Top 40 Albums of 2002. In '03, he followed up the success of his debut with The Horror, an EP of B-sides that played closer to an entirely new album than a collection of leftovers, and cemented Rjd2 as one of music's most talked about new artists. Touring from Japan to Amsterdam, Rj caught wreck with a dizzying 4-turntable reconstruction/reconfiguring/reinterpretation of the album for fans worldwide, sharing the stage with the likes of DJ Shadow, El-P & the Def Jux crew, David Lynch, The Roots and Prefuse 73, amongst others. While Rj soon became the name to drop in hipster circles, he made his bones in the underground, playing a major role in that mid-west power surge better know as Columbus hip hop. After setting it off in 1998 with the mighty Mhz crew on Bobbito Garcia's legendary Fondle Em Records, he caught the attention of El-P and in 2000, he locked in with the Definitive Jux camp, and soon after made his DJX debut on Def Jux Presents I, co-starring with Company Flow, Cannibal Ox and Aesop Rock. Then came the now classic "Good Times" white label 12-inch, and the rest has been indie hip hop history. Over the past few years, Rj's profile as a producer has grown immensely as he's clocked time on the boards producing or remixing Mos Def, Massive Attack, El-P, Aceyalone, Polyphonic Spree, Elbow, Cannibal Ox, and others, wielding a versatility rarely seen in music today. His prolific nature has brought him the unique accolade of 'freelance producer/remixer extraordinaire' in Urb Magazine's Best of 2003 issue, amongst others. As one half of the duo Soul Position, he's the ultimate team player, taking a back seat to his MC, Blueprint, and letting him do the talking, while RJ's music keeps the heads nodding. Their 8 Million Stories LP was received in 2003 to rave reviews and continues to nod, and turn, heads.