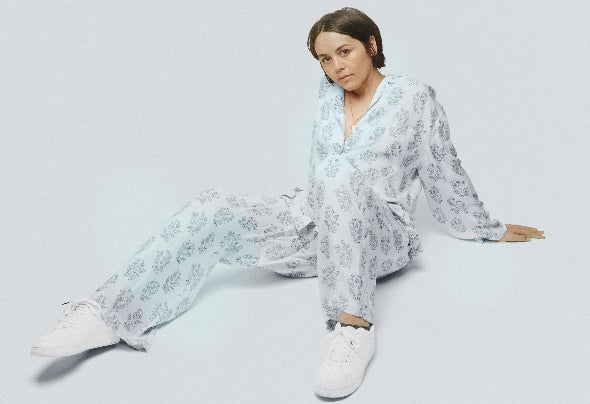 “Every time I sit down to write music, I have no idea what it’s going to sound like” says Samantha Poulter aka Logic1000, “I might have a vague idea of the genre, but that’s about it. My intuition guides me”. This understated approach has fared Poulter well so far in her career, with a string of pulse-raising, in-the-moment releases that sit just under-the-radar while rapidly gathering notoriety. Before all this Poulter was living in her native Melbourne and lacking in focus. “I would just dabble in different careers” she says, “including mental health, children’s services, retail, floristry and running my own businesses. All the while, I would potter around making music, which seemed to get a good response from my followers on SoundCloud”. It wasn’t long before this response caught the attention of local label Sumac who released her debut, self-titled EP. Since the release this EP in 2018 though Poulter found a strong sense of purpose. Moving from her native Melbourne to London, Poulter found a new connection to the music she had loved for years. “This is going to sound so cheesy. I caught the train from south London to the East and in my headphones, I listened to all the music I had loved and listened to when I was back in Aus” she says, “I felt like the music made so much sense somehow. It was given context”. She not only found a connection to music but to people, slotting into London’s vast network of producers and DJ’s and instantly striking a chord with many. Though Poulter cherishes this time in London and attributes a large part of her career to it, it didn’t last long. “It’s a super inspiring city. It’s also a very chaotic city and so as a person with anxiety I needed to find somewhere a little more peaceful”. This somewhere was Berlin, relocating a year later to the more relaxing side of this city (“there are aspects of the city which don’t really resonate with me, like the excessive partying”), she settled into the open minded and nurturing scene that Berlin brings. Finding her place in the world coincided with Poulter finding her place in music. Her debut EP steadily brought widespread acclaim with tracks being played round the world by DJ’s including Four Tet—who, after hearing Poulter’s music via Anthony Naples, included tracks in his Coachella sets and has gone onto support her throughout her career as a mentor and friend, regularly inviting her to join him on line ups. Her music also resonated with supporters such as (to name a few) DJ Python, Fauzia, Ben UFO, OK Williams Floating Points, Annie Mac and Caribou, who included ‘Perfume’ on his 2020 Essential Mix. This lead to performances at London’s Printworks, Berlin Atonal and many more. All this being said, Poulter doesn’t feel she belongs to any kind of scene. As is the nature of her music, she just follows her instincts and goes wherever that takes her. All this came slightly delayed for Poulter. “The dance music community is something I have been a part of for over a decade” she says, “I was very much in awe of what was being released at the time. I remember thinking to myself - maybe I could be a DJ? But I quickly decided that was ridiculous and I think a large part of that is due to the fact that there were so few women in dance music. I didn't really have anyone I could look up to.” All this changed when she took the plunge and left Australia, “I do kind of regret not going for it back then, but also, no regrets!”. Her new 4 track EP and debut with her own label Therapy, ‘You’ve Got The Whole Night To Go’ embraces that confidence. Lockdown meant that for Poulter that instinctive music making approach was able to flourish. “If at any moment I felt inspired or motivated to make music, I would jump into my home studio” she says, “this gave me a sense of purpose while the world seemed to be falling apart”. Keen to have something to show for herself she spent her time working to “finesse my Ableton skills to get to a point where I can put my ideas down super easily” and recording whenever things felt right. On ‘You’ve Got The Whole Night To Go’ Poulter continues to refine her unique and versatile sound, sourcing undiscovered vocal samples from 90’s R&B music videos on Youtube and layering them with multi-genre productions, from UK funky and garage to house and techno. It also hones her production skills as she continues to feverishly get to grips with doing more herself, “the first one felt like a different producer could have been on each track” she says, “but 'You've Got The Whole Night To Go' seems to have more consistency. I can’t quite put my finger on what that sonic consistency is, but I notice it's there.” That’s the key to the continued growth of Logic1000, capturing a moment where things feel right and not trying to overthink it. Listening to her music that feeling is contagious and energising – you can’t quite put your finger on it, but it’s there.