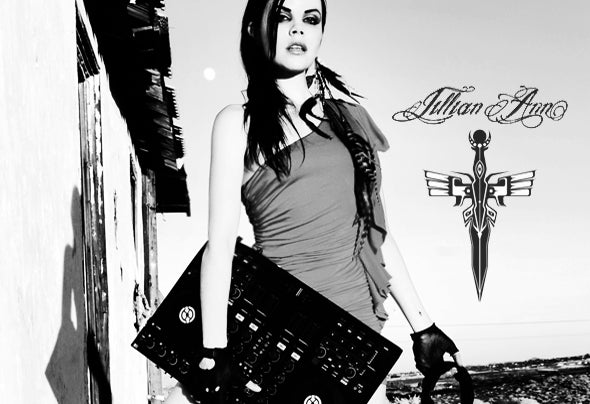 Jillian Ann is a multi-media artist who is equally comfortable behind a piano or in front of a camera, singing on festival stages or producing tracks for a DJ set in a nightclub. This classically trained pianist crosses the musical genres of electronica to goth industrial rock, all the while experimenting and collaborating with cutting edge dj's and producers in dubstep, drum & bass, bass, IDM, glitch and even house and trance and sounds so new there is no name for them yet. She has written top ten hits with Love & Light , NitGrit, David Starfire, Sugarpill, Knight Riderz, An-Ten-Nae , Kraddy, John B,Phutureprimitive and many others has also written an album with Heavyweight Dub Champion and is presently working with a number of new up and coming producers for her unique DJ/Live set which has her singing and playing piano live over exclusive tracks. The Heart: Jillian is an ardent environmentalist and is committed to human and animal rights and her lyrics often cut to the core of her beliefs. Her song "confess" speaks to her experimental lifestyle and the video to it was banned from traditional television stations barring a re-edit which she refused to do. The next video for the anthemic "Know us" speaks to the prejudice that affects all those who look or act differently than the norm. The track record and the gear: Jillian Ann is not a newcomer to performing, she's performed worldwide and fronted for Heavyweight Dub Champion and Auditory canvas as well as for her solo performance shows. This year she added Dj'ing with live vocals and is producing and remixing tracks for herself and others. (A complete list of festivals, dates and venues is available upon request) Jillian's shows can range from self contained to full band. She played a festival every weekend over the summer and fall and her solo set was featured at such premiere stages at burningman such as Bass Camp, Nexus, The Hookadom, Nexus, Fractal Nation, Alongside with world known DJ's. Personal Info: Jillian Ann is a self funded artist from Georgia who now lives in Los Angeles. She funds her music and lives off of her earnings from performing, acting, modeling and art directing and of course music sales. Jillian is also a poet, blogger, tweets (a lot) and is skilled in Photoshop and enjoys photography and video which has lead to her starting to produce and art direct various projects for others and herself. She has turned down several record deals finding them too limiting and prefers instead to find distribution partners for her musical creations. Jillian has this to say about the present music climate. "Having a major label partner is great for some acts, but not for those who experiment and want to stay on the creative edge. I'm too much of a control freak to allow somebody I do not know to come in and design a website, plan a strategy or tell me what trends I should follow. When I did have major label support I ended up doing everything myself anyway. Now I own what I do and if people steal my music, at least they are stealing it from me, maybe that way I can convince some of them to actually pay for it or at least come see me live or buy merchandise. Most people have no idea how hard it is to actually make ends meet in today's climate where the rights of artists are routinely stepped on by everyone from local promoters to pirates sites, all the way to the major cartels, all this in a world were art is more needed than ever." Last thoughts: I'd like to live in a world where compassion and kindness are not seen as weaknesses to be exploited, where being different triggers interest and not suspicion, where art is once again recognized as an important quality to being alive and hopefully get people to recognize that by hurting the planet we are killing ourselves.