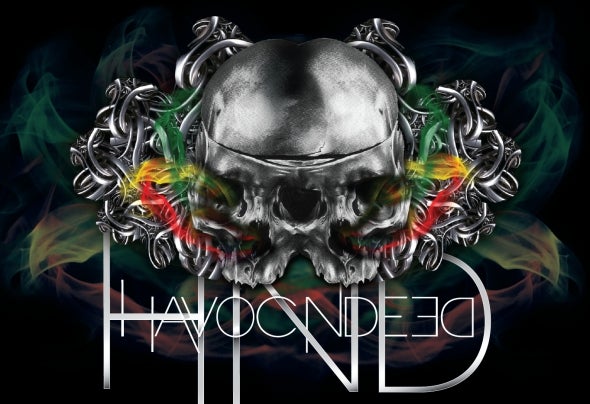 Like any artist making a significant amount of noise in thebass music selections of contemporary times, duoHavocNdeeD discovered a passion for electronic music inthe drum & bass areas crammed back in the darkestcorners of those massive raves of the 1990’s. A recentcollaboration between marquis U.S. disc jockeys (OB-oneand J. Paul) drew upon their extensive experience in thelargest nightclubs of Los Angeles, Las Vegas, Chicago, andMiami. The years behind drums, synths, guitars, and crateafter crate after crate of every genre of music from the last50 years combined with those fond memories at the foot ofgiant bass bins to create a sound all their own. Their firstsingle "Bass4YaFace" is a testament to that. Creating abuzz on Beatport and getting regular spins from DJs varyingfrom Z -Trip and Jazzy Jeff to The Next Men and Drop TheLime.HavocNdeeD has followed-up with numerous well receivedsingles to date. The growing reputation of DJ-synth-drumguitar-vocal combinations in their live shows secured slotsat must-attend events over the last year. This includes the420 Festival and World of Drum & Bass, and pulled themaway from North America for performances in Australia andNew Zealand. While the releases don the logo of theirnewly-forged 119 Sound label, dubstep giant Play MeRecords saw their potential early on and was instrumentalin their growing exposure. The most recent offerings areremixes for Geoffrey Paris and American Idol star JulissaVeloz. Though it was a video posted by Linkin Park thatholds the key for tomorrow's projects.Drawing upon their love of classic hip-hop, HavocNdeeD feltthat NWA's "Dopeman" deserved a dubstep remix. Thissomehow gained the attention of Linkin Park frontman MikeShinoda who posted a video of it on his blog doing a liveremix session. When looking at possible remixers for thenew Linkin Park album the duo came to mind. "Our newrecord is more beat-driven and electronic than our pastefforts, so I thought it would be a good fit", explains Shinoda."Their remix of "Wretches and Kings" came out incredible...the bridge section is massive!” The remix came full circlewhen Chuck D from Public Enemy cut an original verse forthe track giving it a nice blend between classic and modern.Upon fulfilling expectations for the remix, HavocNdeeDcontinues to open doors to more opportunities. They havesince completed a remix for She Wants Revenge andCypress Hill & Rusko as well as an original collaborationwith reggae legend Cutty Ranks. They look forward toexposing even the most mainstream of music fans to theelements they love about independent dance music... and make those people love it too.