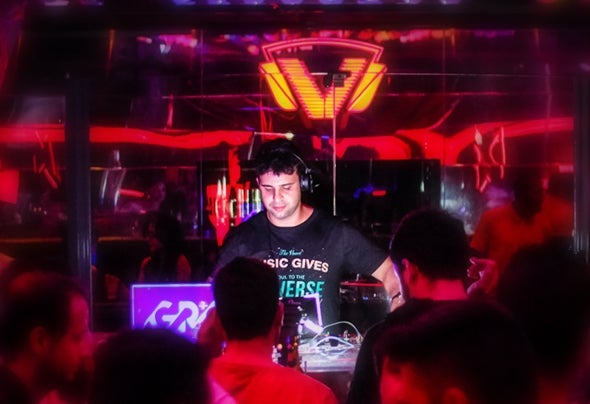 Handerson’s got more than 14 years of experience in the pick-ups and on his radio shows. Thoughout his career as DJ he became resident of some of the major clubs in the state of Santa Catarina, highlighting the 8 years of residency at the legendary club Baturité, in Balneario Camboriu, which served as reference to the newer generation of DJs.He currently holds residency at Sky Beach, one of the most prominent clubs in Southern Brazil, and also at the Hari Music Festival. He has performed in most of Brazil’s top clubs, such as Green Valley, Club Vibe, 2Me Music Essence, Ding Club, Parador Beach Club, Caramba’s Hyperclub and Bielle. He’s also performed at clubs in Argentina, Paraguai and on his most recent tour in the UK he performed at Pacha London, T he White Rooms and McQueen Shoreditch at the “Café Olé” party - Space Ibiza’s traditional Monday parties. He has shared the booth with huge names such as Tapesh, Ned Shapard, Sharam Jey, Chris Lake, Rowan Baldes, Dexter Krane, Jay West, Spirit Catches, Rick Ryan, Kanio, King Unique amongst others.His knowledge goes way beyond the clubs. He produces weekly House Music shows for Jovem Pan and Transamérica radio stations for the last 12 years. Some of his most famous projects include Power Mix, Dreams Connection, T he Green Project Radio, Groove Station and Amores da Brava Club House, that goes on air every Friday and Saturday. He’s also the producer of Muzik Box, a weekly show that goes live every Thursday through hostess.fm from New York, always featuring a guest DJ.As a producer, he releases his tracks under South B. Records, Lust Be Records and Lo Kik Records. His latest release “Drop The Bass (Original Mix)”, with André Anttony, has been receiving support from names such as Amine Edge & Dance, Saccao, Re Dupre and others.His experience puts him at a whole different level. He can get anyone dancing, anywhere, any time.