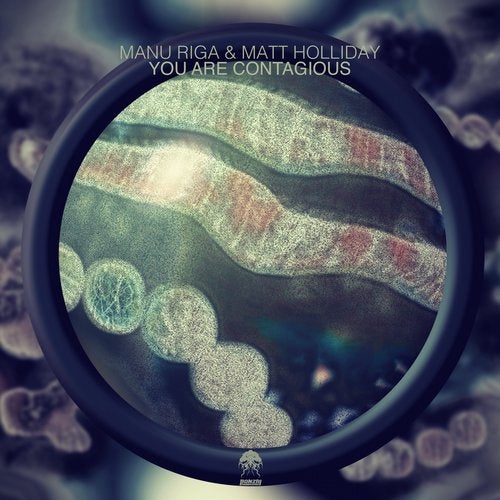 Having joined forces just a few short months ago, Manu Riga and Matt Holliday deliver the fruits of their labour with the superb two tracker You Are Contagious. Both artists bring their different expertise to the table, Manu aka Adriaan Baussens, with his deep, dark and tribal ethnic flavours merges beautifully with Matt's progressive trance, tech edged grooves. Their producer minds have connected effortlessly as they collaborated initially via Skype and then in person with Manu travelling to Matt's hometown of Birmingham. Manu is a longstanding member of the Bonzai family and has brought many top notch progressive tracks to the table, a list way too big to type. Matt has established himself firmly within the underground scene in the last few years, he has released on top labels including JOOF, L*C*D, Discover and Go On Air. His style of producing covers progressive, trance and deep tech grooves and it was this that caught the eye of John 00 Fleming, who described him as a "great discovery". A big moment for Matt, and one he takes great pride in, was back in 2014 when he had the opportunity to remix a track for the legend that is Airwave. Big plans are ahead as these two gifted artists let loose their creativity in the studio and refine their DJing skills with upcoming radio guest spots.

You Are Contagious is a definite peak time track with it's tough edged, tribal infused grooves. We get sucked right into this groove from the get go as a deep, throbbing bass bubbles up from the depths alongside some expertly placed sounds and FX. Classic house styled chord stabs litter the sound and lead us seamlessly into the more progressively charged side of the track with the addition of ethnically charged voices and tribalistic drum sequences. On the break is where this track really lifts off, deep droning basses converge as bright melodic leads splatter across the spectrum alongside rich sweeping strings. The voices come to the fore before tribal drums get us back into the beat driven rhythms. A roof raiser for sure you will not want to miss.

Roots takes us deep into the darker side of progressive with its haunting intro filled with chunky beats and ghostly scraping sounds. A myriad of one shot hits litter the arrangement and add wonderful textures to the sound. A real deep rooted vibe emerges as the pulsating basses lock horns with the superb tribal beats. The haunting theme is greatly enhance with an absolute gem of a female whispering vocal that will send shivers down your spine. Throughout the track we get treated to many ethnic sounds but the stand out moment is a didgeridoo riff that is placed so perfectly in the composition. Another must have track that will be right at home in the middle of your set.