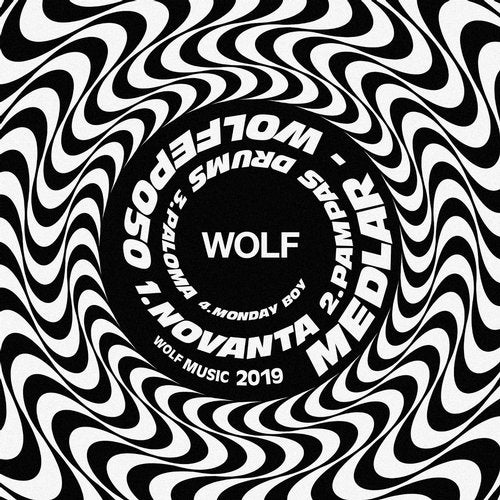 There's no better man to mark the fiftieth release on WOLF Music than South London stalwart and OG WOLF family, Medlar. Marrying techy touches and UKG stylings, with sonar bumps and Medlar's signature, sample-heavy groove, it's a fitting way to bring in the half century.

The Peckham powerhouse throws down from the off with the rubbery, wiggling, 'Novanta'. A garage infused lo-fi shuffle, springing samples and saturated stabs mingle with a choice vocal snippet. Looping up a Rhodes top line Medlar adds a certain swagger to this South of the river saunter.

'Pampas Drums' gets the room spinning with metallic percussive hits, twisting samples and wiggy zaps that form a cosmic swirl of echoes. Like a perpetually charging ray gun that's about to blow, the rising swells add layers of suspense to this hardy drum workout. Perfect laid over tracks or to shock dancers in it's own right.

Take to the flip for 'Paloma' showcasing Medlar's fondness for a dose of UKG. Swinging hats and skipping claps blend with offbeat vocal cut-ups that give a classic underground '90s spark. Rolling subs add a weight whilst a crunched-up soulful synth offers a fresh flavoured touch to this tough jam.

Medlar rounds off the E.P in the Rye Wax basement with late night slammer, 'Monday Boy'. Straight up, synth heavy club business, rich in analogue power and perfectly interlaced melodies, that has peak time written all over it.

Ten years in the game for WOLF Music and a landmark 50th release produced by a man who's been part of the brotherhood since the beginning.