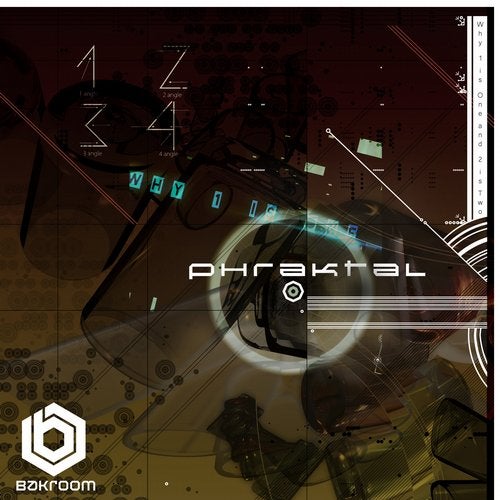 Phraktal are one of electronic music's most exciting prospects for 2015, formed by Christian Boshell and John O'Dwyer (Casper), who have both been highly active within the electronic music/club scene for some years now. Their debut album, the intriguingly titled "Why 1 Is One and 2 is Two", is set for release in March 2015 and covers a multitude of genres, ranging from sci-fi inspired electronica, ambient soundscapes, deep house, breaks and tech-house, through to techno.

The duo's highly original, quirky electronic style is already gaining critical praise and support around the globe as they create decidedly danceable gems by flexing their diverse production skills, avoiding easy and obvious sounds within the electronic spectrum. For example, the album opens with the experimental filmic soundscape of "Now Or Never", flows effortlessly forward with the luscious deep house of "Mindshapes", before "Fusion" takes a hypnotic trip into stylish tech-house territory.

Diversity is what makes this album such an exciting prospect - "Hanging Around Corners" takes a fizzing breaks blueprint to introduce some cosmic beauty to the proceedings. "System Error" conjures up memories of classic tunes of old, whilst updating that attitude for current tastes. The album title track finds itself exhibiting maximum peak-time, euphoric dancefloor potential, before the razor sharp techno beats of "Transfer" takes the energy up to an even higher level, and "XXII Ely" adds a little acid to reach a suitably climatic peak. Finally, the sprawling ambient masterpiece that is "Resonance" brings Phraktal's experimentation full-circle with a suitably show-stopping finale.
Creating this stunning debut album took the boys over 1000+ hours of studio time, completed over a 2 year period, with the final product being whittled down from a possible 30 tracks to a concise 9 track selection that they feel most clearly expresses the Phraktal sound. The idea for this album project came about whilst Christian and Casper were remixing "Speakerhook" for Omnis Recordings and their synergy working together grew quickly into developing a definitive and exciting body of work, and the electronic scene in 2015 is all the better for their dedication and experimentation.

Bakroom is planned to become an eclectic musical melting pot of productions from both established artists and previously unreleased raw talent. The first release ("In the Name of the Dogs") was from up-and-coming Turkish DJ/Producer Evren Ulusoy{Plastic City], whose driving deep house is currently topping many people's playlists. The second single on Bakroom, Phraktal's System Error remixed by Roland Klinkenberg was signed to Sam Paganini's FEB 2015 Mixmag compilation CD. Further singles and remixes featuring the likes of the legendary Jamez (Touché Records), Ben Shaw, Jerome Krom, Astronivo, G-Prod, Blue Amazon and Stephen Lopkin are set to follow.
For now, Phraktal's "Why 1 Is One And 2 Is Two" album is a landmark statement to kick 2015 off in style.