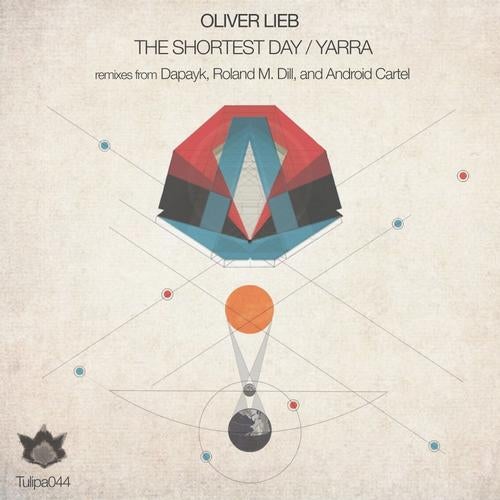 Ignited by the particles ricocheting throughout the thermosphere, Oliver Lieb crashes down to Earth in a blaze of magnificence. He has been sent back in time to transform the current status quo of electronic dance phenomena. Oliver sweeps across the arid plains, tropical forests, and frozen peaks in order to grasp the planet as it is now. His plan is to tune the entire population of Earth in to the synchronicities of futuristic techno.

The first order is The Shortest Day. The utterly unique synths dabbling throughout transcend all that is alive and well in electronica. The Shortest Day creates a vortex of audible jet streaks that soar deep into a high level of musical divergence. Yarra is a self-absorbed adventure into a thermodynamic soundscape trickling with warm fluids and swirling with heat energy. Again, Oliver Lieb's synth work takes control and steers Yarra into an underground abyss perfect for neurotic moments of non-formulaic bliss. Dapayk melts The Shortest Day down into a coulee of sweltering grooves. Bass heavy and brash, his mix is likely to strike worry in the hearts of casual listeners. Roland M. Dill, a man known for his originality and unparalleled appetite for innovation, provides a warm and magnetic composition oozing with mechanical assurance. The duo Android Cartel finalize the release with their own mind altering swim through the possibilities of the human consciousness. They boldly add a cascading twist in their interpretation of The Shortest Day. This is the perfect way to conclude an already soul-absorbing journey.

Oliver Lieb has set his sights back to the stars. Above, he is able to travel back to his era. We can all learn something from this master of circuitry. There are many explored avenues to steer through in music. The safe route is always available. However, it is those who break through this comfort and create sounds that crush the boundaries that ultimately rise above the rest. Oliver's journey back to the stars leaves us with optimism and Tulipa Recordings is proud to say he has a home within our gardens.