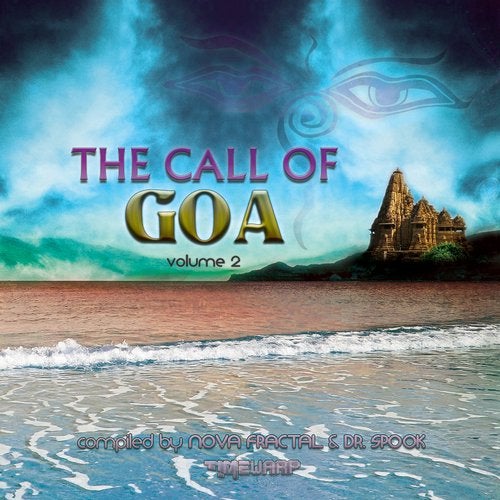 Timewarp presents: "The Call Of Goa v2", a momentous retro-themed 2CD compiled by Nova Fractal & Dr. Spook. Once more the sacred tones ring forth, the annual ritual will soon begin! The High Priest has been selected who has shown exceptionally dedicated results and will be elevated to a new level. His followers and psychophants eagerly awaiting this prophesied event muster a fervour and exuberance here to for never experienced! As the orbit of our planet marks the passing of another cycle so does the earthbound growth usher in a new era! Behold the first solo physical limited edition dual disc release from the Timewarp cult! Giving the celebration new purpose Nova Fractal is handed the sacred sceptre by none other than arch wizard Dr. Spook who combines forces to issue forth this tome of secret treasures. From the four quarters of the world the call is heard. The prophesied day is coming when the messengers of the skygods would come and reveal to the worthy the arcane secrets and mystical methods. And so it was a gathering like none had ever seen before, Wizards & Warlocks, Witches and Wiccan, Sorcerers and Sychophants, Conjurers and Incantationists, and so many more. on they came bringing their own secret boxes and stuffed stash pouches, chests and coffers, and countless more contraptions of magical might. Together the greatest 20 formed a circle and began a momentous casting of all their most powerful spells, each releasing the power in tandem with the next, fluidly and flawlessly manifesting gestures and uttering half muttered phrases. As this great conflagration reaches its crescendo a series of hidden portals open and usher forth the heralds from the higher continuum. Timewarp Records is a new sublabel of Ovnimoon Records focusing on classic retro inspired goa trance co-managed by Nova Fractal, Hector Ovnimoon, Random & Dr. Spook. Expect some out of this world music light years ahead of its time, get ready to enter the Timewarp.

The Call Of Goa v2 by Nova Fractal & Dr. Spook