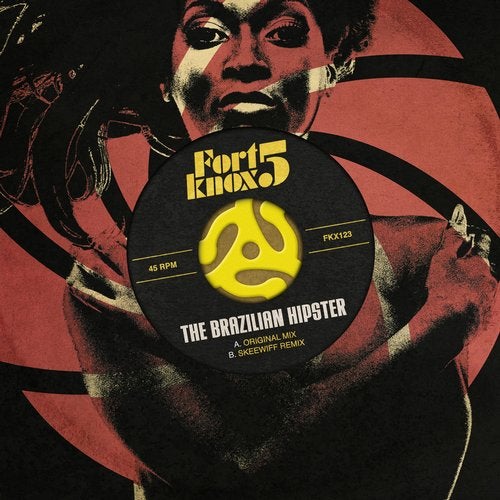 Often its just one song that comes to define an artist, becoming their marquee track. For Fort Knox Five that track is The Brazilian Hipster. Released on Fort Knox Recordings in April of 2004 the tune became an instant sensation and party hit, appearing on the famed Hotel Costes collection and the soundtrack to the Academy Award-winning documentary The Cove. The original 12-inch single, which featured the Dr. Rubberfunk Remix on the B-side, quickly sold out and has been out-of-print ever since. Now, exactly fifteen years later, Fort Knox Five are rereleasing The Brazilian Hipster on 7-inch vinyl for the very first time, with the coveted Skeewiff Remix on the flip side.

What can be said about The Brazilian Hipster that hasnt been said before? From Rob Myers juicy bossa nova guitar lick to Steve Raskin's retro-future production stylisims, there is something inimitable in every corner of this track. When those classic, heavy-hitting horns drop into that perfect pocket a little bit of magic starts to happen. This is the party youve been looking for, with low-key cool and laid-back hustle. The Brazilian Hipster has held up so well, over the past 15 years, it has earned a spot in the record bin of timeless tracks.

On the flip side of this 45 youll find a rare gem: the elusive (and now exclusive) Skeewiff Remix of The Brazilian Hipster. Skeewiff cuts a groove like only he can and delivers a complete reintrepretation of FK5s seminal classic. Starting with adramatic build, the squelching organs and bubbling percussion all come to a head in a funky, breakbeat ode to 70s cool. Relentless from start to finish the Skeewiff Remix percolates with retro flair, dropping happy surprises all along the way.

And don't forget to check out the cheeky cover art that references the original vinyl, (done by the FK5 themselves.) This package is, well the full package. It sold out the first time, chances are it will again!