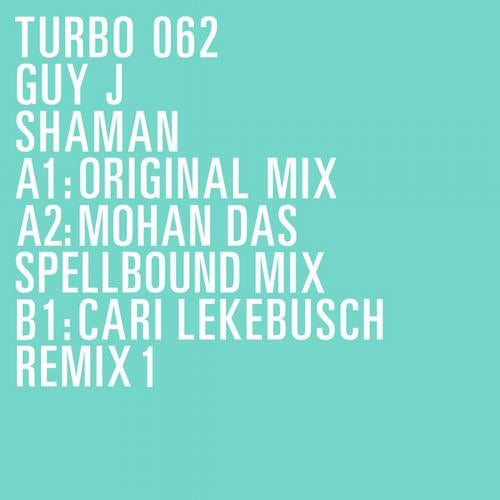 In Thomas Von Party's words:
When Guy J's 'Skin' hit #2 on Beatport, it was a defining moment... beatporters had spoken loud and clear, deafening the shrill cries of infant bloggers... the 'Isreality EP' was a hit for Turbo, and we were amazed to see a lush, proggy track outsell most of our heavily hyped 'bangers'.
After that success, Guy's manager sent me a bunch of new tracks, many of which ended up on the critically acclaimed 'Esperanza' LP... 'Shaman' was my favorite of the bunch. We could have just released it... but next-level A&R is about more than choosing tracks... it's about choosing eras, and we needed to finish nu-rave before we could begin the tropic-o-bongo house revolution of 2009...  Credit the Turbo administrative vacuum for sitting on a track this good for so long, until great remixes are done, and the world is ready.
Tiga and I have both played it towards the end of some very special sets in the last year... it has a nice type of 'soft' impact... it somehow manages to add energy to the crowd without being louder than the track before it. To the tired ears of veteran dj's, that's a rare pleasure.
There are also some great remixes in this pack... a subtle, punchy rework by Mohan Das, an extremely playable, deep, dubby mix from the venerable Cari Lekebusch, and last but not least, available digital-on