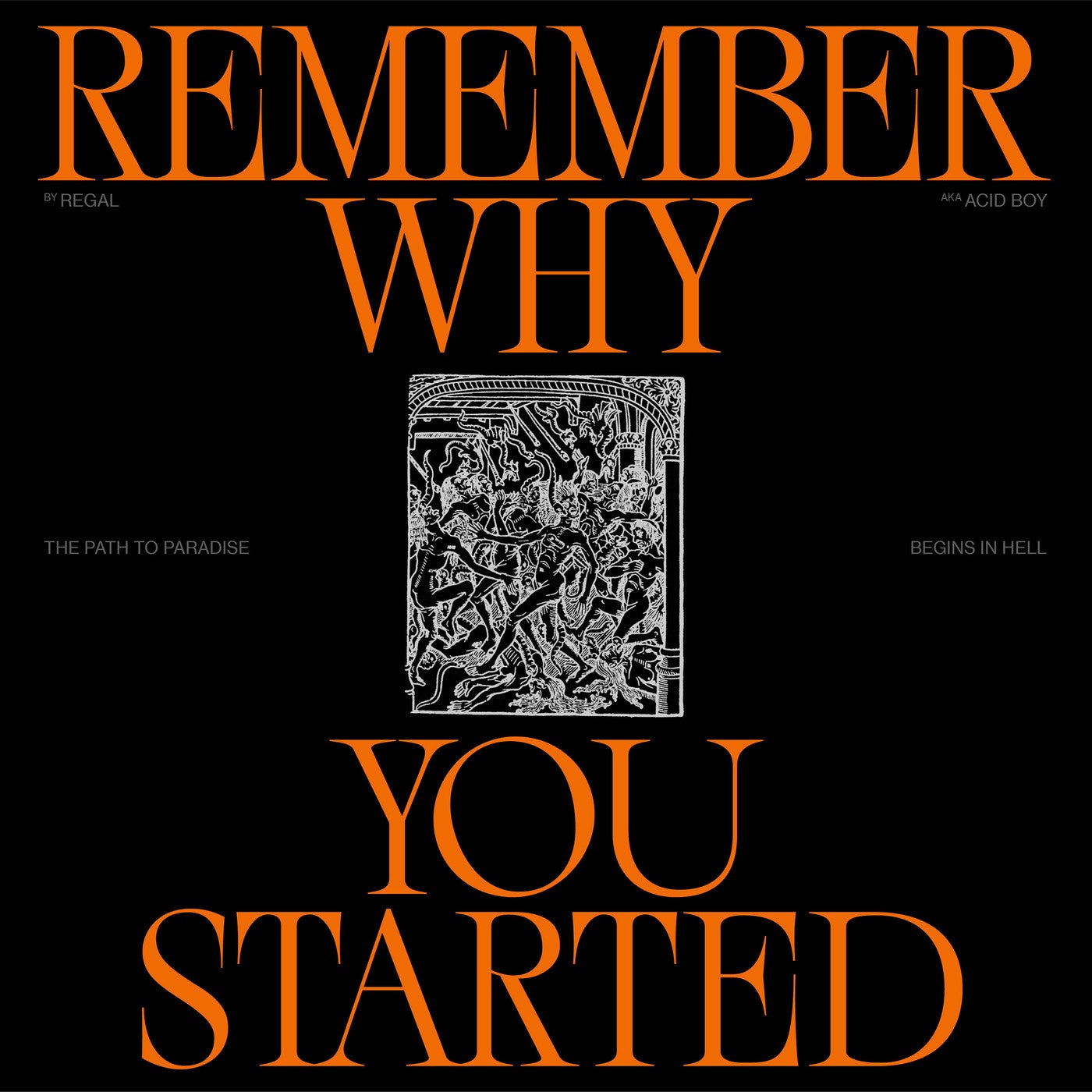 "Remember Why You Started is meant to be a message for everyone, including myself, to look back to your roots –where anything you do is influenced by nothing but passion" -Regal

Regal's genre-bending sound has been capturing the hearts and minds of ravers and industry heads since 2012. His staunch productions have garnered support from techno's well-established vanguard, including noted collaborations, projects and remixes with Amelie Lens, Hadone, Nina Kraviz, Ellen Allien, Emmanuel Top and Len Faki. Regal's sound graces clubland with full-throttle impact –whether at the legendary Berghain, Awakenings, Possession or his residency at Khidi in Tibilisi. Alongside his own productions, Regal's imprint Involve has become established for delivering sharpened 303 infused acid sounds. The imprint has welcomed artists including Boston 168, FJAAK and Alignment and is now also the home for his debut album this June.

"The concept has changed a few times over the past few years" says Regal. The focus was to make an album that tells the story of his personal struggles and self-discovery, a dark insight into the DJ's life, influenced mainly by Dante Alighieri's 'Divine Comedy', where Dante has to cross all the layers of hell and purgatory to arrive in paradise.

It opens with 'Respect' and its razor-sharp synth lines clamber over distorted vocal shots and glistening melodic elements. An apt introduction to Regal's earth-shattering sound. 'Burning Old Idols' plunges listeners into a four-to-the-floor techno domain, surrounded by industrial rhythm and a searing 303 acid-line for extensive club use.'She Dances Alone' is a love trip. It bumps up the BPM for a glorious 90's techno spirited track with refreshing melodic accompaniment –the drum production is reminiscent of the militant Detroit sound we all know and love.

'Dungeon Master' emits a seemingly demonic presence as warping synths intertwine with staggered kick drums and lasering sound effects.Title track 'Remember Why You Started' flows effortlessly between gristly acid basslines and weightless ambient pads, the spaciousness of the composition is something to be revered. 'Requiem for a Friend', featuring piano virtuoso Fabrizio Rat, conveys leftfield arpeggiators suspended in a melancholic chord progression. The disjointed drum break creates a kaleidoscopic effect when introduced alongside the twisting musical elements.

The midpoint of the album is ushered in by 'Dealing With My Pain'. A pitched down vocal segment is scattered through the track with menacing effect. It's a track about loss and finding a reason to carry on. 'Run', featuring Involve core artist Z.I.P.P.O, takes classic electro drum patterns to new depths of intensity. The overdriven bass drum and cowbell combination is sure to put a wry smile on the face of listeners. 'Fearful Nights' is slow-paced and ethereal, deep down its dark message is about the demons in your head when you close your eyes at night.

Some last words, a testament as such is 'Before I Die' featuring the standout vocal of Pau, it's a track guaranteed to change a room's energy. 'The Last Dance' brings glitchy rhythm sections into a fray of lo-fi melody. The fast-paced progression evolves the track seamlessly between warping trance and techno palettes. Regal's album comes to a powerful orchestral conclusion with 'Cult Of Personality', fusing tense strings with a bombardment of crystalized hi-hats and claps. It's a track which sums up everything and bringsthis album to a perfect close.'Remember Why You Started' is a fierce credit to this producer's originality, to be followed by a standout remix pack later this year, we have a lot to look forward to.

Remember Why You Started