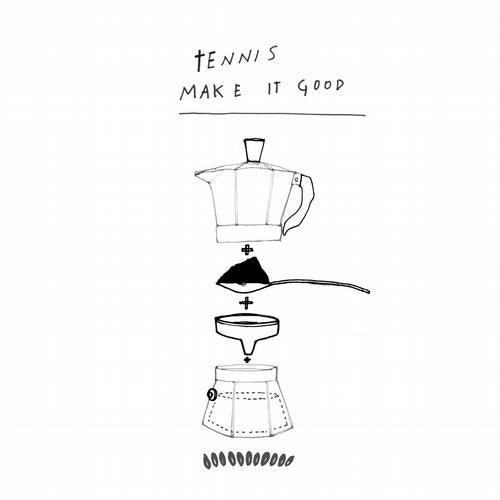 Artist: Tennis Titel: Make It Good Label: Life And Death Catalog No: LAD005 Barcode: 880319573118 Format : Digital Release Release date BEA : 23 April 2012 exclusive: 4 weeks Tracklisting: 1 Make It Good (Original Mix) 2 Monocraft (Your Love Is Alright) 3 Make It Good (Larry Heard Vocal Dub) 4 Make It Good (Ryan Elliott Remix) 5 Make It Good (Larry Heard Vocal Remix) 6 Make It Good (Tale Of Us Remix) Releaseinfo: Tennis Make It Good EP 36 hours in. The lights are flickering and the sweat is pouring out of you like the thoughts that you're trying to write down, to get down the words, to put down the message, to translate all the ideas that keep appearing in your head. Ideas, like uninvited guests, that keep showing up and refusing to leave. Somewhere though, there's some truth in there. You know it because you saw it. You know it because you felt it. Because when you knew that - even though there were ten million reasons why you should go to bed now, why you should go to bed straight away - that you should put these silly things down, stop trying to create and just get some sleep already. That you should stop trying to wrestle the ideas in your subconscious down to the ground so you can actually capture and express them to others. But you persist. Because anything else would feel worse than failure. It would be a disappointment to the voice behind the voice inside your head. The voice that is you but that is not you at the same time. The voice hears you thinking and comments on it and injects some other crazy ideas and - by the way - where the hell did that come from? You keep pushing. You keep working, sweating, straining, everything you can to get it all out. To get that idea across. To do that thing that in your soul you know that you specifically, you alone in the universe, are uniquely equipped and qualified to do. You can make that message heard if you can just figure out the right way to get this to work. To make it express that thing that you know in your head but could never say with your words. Make it make people understand what's inside there. That thing you know that can maybe make someone else's life better, even if for a moment. You will stay and work. You won't stop pushing. You don't stop working. People are really depending on you. Keep going. Work harder. Make it happen. Make it good. This debut EP from Life and Death founder and co-conspirator Tennis is a testament to the hard working ethos and dedicated artistic force that is behind everything done in the Life and Death name. Deceptively simple is one of the hardest heights a song can aspire to and yet this ep sounds as if it was almost sliced ready-made from the fabric of reality, so deep and so clear is its message. A lovesong sung to an idea, a serenade to an intangible concept that comes out sounding as simple as a mantra but clearly contains much more than just a quick listen reveals While this is a debut release from Tennis he is far from an actual debutante. With a wide and storied background in music production, his past has had him creating soundtracks for stage plays and orchestrating both movements of music and movements of musicians for the last 15 years. But typical to his style, he's waited until all the pieces were in place and the work was ready to be started. Until the work was ready to be begun and the music was ready to be heard. Waiting until it was possible to make it work. To, make it good. Make It Good Music by Manfredi Romano. Mixed by Tobias Freund. Larry Heard Vocal Dub - Remix and additonal production by Larry Heard for Larry Heard Sound Developments. Assisted by Bernard Badie (Courtesy of DJB Productions). Ryan Elliott Remix Remix and additional production by Ryan Elliott. Larry Heard Vocal Remix - Remix and additonal production by Larry Heard for Larry Heard Sound Developments. Assisted by Bernard Badie (Courtesy of DJB Productions). Tale Of Us Remix - Remix and additional production by Tale Of Us aka Carmine Conte & Matteo Milleri. Monocraft (Your Love Is Alright) Music by Manfredi Romano. Voice and lyrics by Jeppe Kjellberg. Additonal production by Matteo Milleri. Mixed by Tobias Freund.