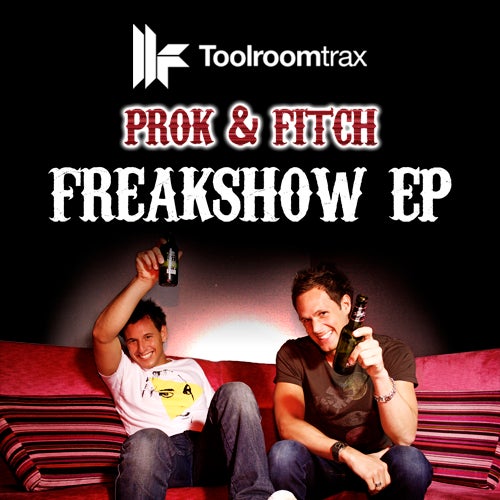 Prok & Fitch are hot property right now with recent releases & remixes on Strictly Rhythm, Cr2, Stealth, Axtone, their own label Floorplay, and now with their debut Toolroom release ‘Freakshow EP’. The British duo are making their mark on the world with a trademark sound of energetic bumpy beats that are regularly supported by the world’s elite DJ collective.

Lead track Freakshow is a rocking, twisted yet funky slice of bass driven house that plots to wreak havoc on any dancefloor the DJ dares to play! Building with groovy beats, high energy stabs & bolshie FX, Freakshow explodes into overdrive to rock any club to its core!

2nd track Rightdown is another defining production for the guys, a slightly more uplifting affair filled with arpeggiated synths, percussive rolls and a catchy vocal stab that breaks down to unleash a monster build of rising FX before dropping back into the dominant groove that is ‘Rightdown’.

Freakshow EP is a seismic two track collection of epic proportions, a defining release for Prok & Fitch taking them one step further to join the A list of DJ’s & producers, these guys are on fire!