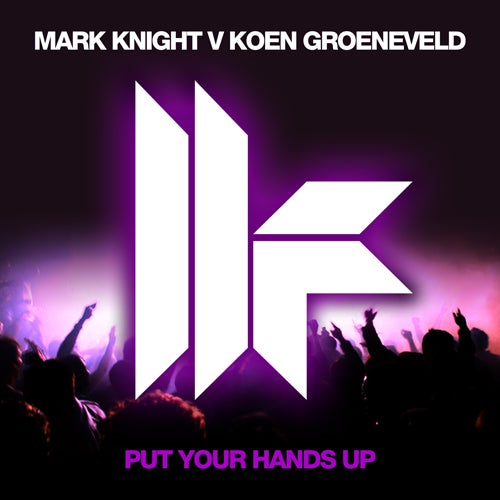 Two of Toolroom’s hottest stars collaborate to bring you another club anthem ready to fuel the fire of the world’s discerning DJ’s.
Head Honcho Mark Knight & rising Dutch champion Koen Groeneveld have joined forces to bring you ‘Put Your Hands Up’, a track that does exactly what it says on the tin; an energetic slice of tech goodness with a vocal chant screaming to ‘Put Your Hands Up’!

The track is split between two mixes, one courtesy of Mark Knight & the other from Koen Groeneveld, taking the track into slightly different directions.
Mark Knight’s remix builds the vocal chant right from the beginning, taking you into a driving synth lead groove that drops into lush, warm pads and the vocal chant ‘Put Your Hands Up In The Air’ this will have the crowd raising the roof! An intense build up brings the track back to crisp percussion, tight techy stabs and that pumping groove that will have the club in overdrive!
Koen Groeneveld’s Remix follows suit with sharp, piercing drums, a catchy synth groove and that dutch percussion that gets everyone moving! Building in a similar style, Koen uses the vocal chant alongside Big FX to cause maximum damage in the breakdown before dropping back into the groove that will have everyone reaching for the sky!
This is an essential addition to any DJ’s playlist this party season!

Put Your Hands Up