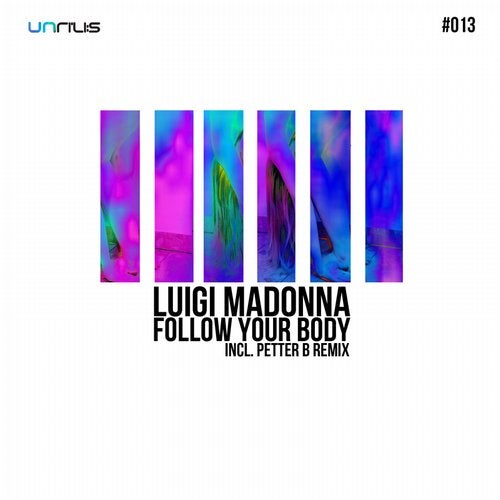 SUPPORTED BY: UMEK, ADAM BAYER, SLAM, SASHA CARASSI, JOSEPH CAPRIATI, MISSTRESS BARBARA, THE ADVENT, MARCO BAILEY, KAROTTE, TIMMO SAM PAGANINI, SIAN, SPEKTRE, TONY ROHR, ALAN FITZPATRICK, UTO KAREM. Emerging on the scene in 2008, Luigi Madonna has established himself as a young, extremely gifted Italian DJ. He pays tribute to old school European techno artists in a fresh way, blending in a fusion of experimental sounds and beats. His work not only would appeal to any DJ or club-goer, but easily could attract the attention of major video game labels for an unforgettable experience.Starting with a quick pulsing beat of a rattling hi-hat and timpani combo, Follow Your Body is an intense and fun track that commands full attention from the listener. The synthetic elements build up into a comprehensive and subtle melody that easily could be sampled or used as a base for remixes (such as the case with Petter B--the Gothenburg-based DJ and producer). The circular style is broken up by these added components of variety that provide a different and unique experience to the listener. Any dancer in a club would be delighted if this track were spun.Halakane is one of those breakout numbers that most DJs dream of. Starting with a low bass and drum track run through a remixer, the piece soon draws in influence from dark trance and takes it a step further. It plays with experimental sounds and rhythms. The synthesized notes and rattling gives an exotic feel to the piece. Around two minutes in, a higher melody accompanies the already hypnotic drum track. This continues to re-emerge in waves, building up with the addition of cymbals and scratching. Its ending is subtle enough to serve as a great anthem for the last song of the night as the listener is drawn out of their world.Having caught the attention of Swedish DJ and producer Petter B, the Follow Your Body Petter B Remix is presented in a brilliant, original way that blends his deep techno origins from his band Hertz with contemporary dark trance and a hint of house. The throbbing beat utilizes the sophisticated layers that Luigi Madonna created, most notably his spectacular hi-hat and timpani combo, while adding sounds that almost sound like a string instrument being plucked. The depth of the remix gives the listener the impression of the music being 3-Dimensional, surrounding their body, making this track a strong candidate to be played at clubs and concerts.