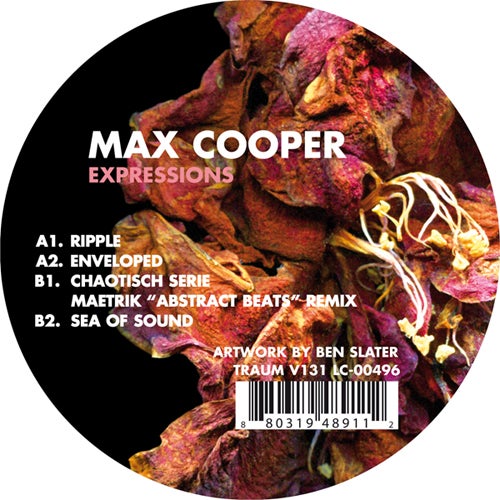 “Expressions”, well this might sound a bit simple, but lets face it, there is a lot music out there wich does not really express too much of an emotional and soulful attitude. So when you boil things down to what you really want to hear these days, it is something really personal and intense. Max Cooper has over the last 2 years become one of the figureheads of modern composed electronic music on Traum and is gaining popularity rapidly amongst those who like beautifully crafted and composed electronic music. With his four records running under the name of “Series” released on Traum, he is now immersing the audience with a warm soup of organic sound. Opening with “Ripple” this epic builder, heavy with bass, tripped out FX, haunting abstract vocals, spiced with teasing climaxes, this is surely another top Cooper track in the making. More than any other of his a-side tracks though “Ripple” amazes through its gentleness and almost classic electronic feeling, which evokes artist such as Terry Riley or Philip Glass. One could even call it a bit of an departure to deeper grounds. Saying that “Enveloped” is much more detached and although it might have dreamlike connotations this great piece of music incorporates all the strength and vitality classical music is known for. The b-side features a remix by artist in demand Maetrik of “Chaotisch Serie”. Maetrik has provided the original with a traumatic mutant disco experience not unlike Cosmic Sandwich's Track “Cosmic Sandwich”. The way he treats the beats makes it a sexy monster for DJs for sure. “See of Sound” then swings back to the original intention of this EP and says it all through it’s title... waves of weeping strings, voices from the far away... make it a perfect soundtrack for a minimalist film noir director like Jean-Pierre Melville. Or is it simply the soundtrack of a hot summer evening in a deserted garden full of flowers?