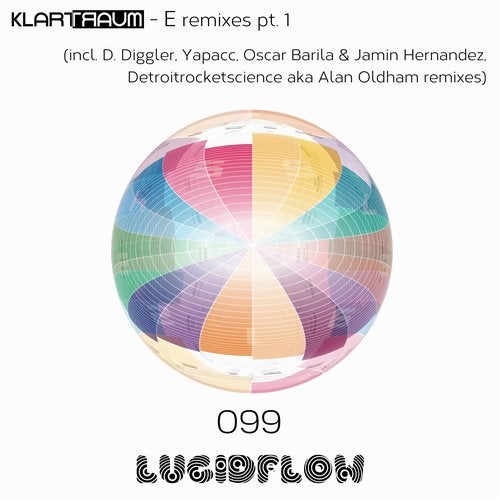 Last year saw the release of Lucidflow owners Nadja Lind and Helmut Ebritsch's studio album "E". Unconventionally, it was split over each quarter of the year, with each cover of each issuing coming together to represent an enneagram, the model of human personality.More conventionally is the celebration of a Klartraum album by drafting in familiar friends and collaborators new for a remix extravaganza. Split once again into digestible chunks, the first package comes complete with D. Diggler, Yapacc, Detroitrocketscience, Oscar Barila and Jamin Hernandez on remix duty.While tackling Bell Birds Dub, D. Diggler rolls out his trademark tough edged beats. A softer side is displayed as the melodic touches and dub elements drift carefree over the percussion as if floating on the Dead Sea.Oscar Barila and Jamin Hernandez team up to take on Drama Queen, paring a funky backbone with the emotive synthwork. It's light and airy, perfect for working those sunset moments on open air Ibiza dancefloors.Long time Lucidflow collaborator Yapacc turns in an emphatic reworking of Bell Birds Dub. It swells into dense swirling foggy textures before peeling away for a stripped back final third. Its marriage of organic and machine influences creates a driving fluidity. Alan Oldman lives up to his Detroitrocketscience moniker by going tough on Bill Bill. A driving beat works with atonal stabs, although a thread of delicacy is allowed through the faintest of melancholic melody.Finally, the original dark and churning Bell Birds Dub ties off the release, giving you the chance to catch an element of the originating album for those who have slept on it. E Remixes Part 1 hits on 11th April 2016, keep your ears to the ground for more from this remix extravaganza.