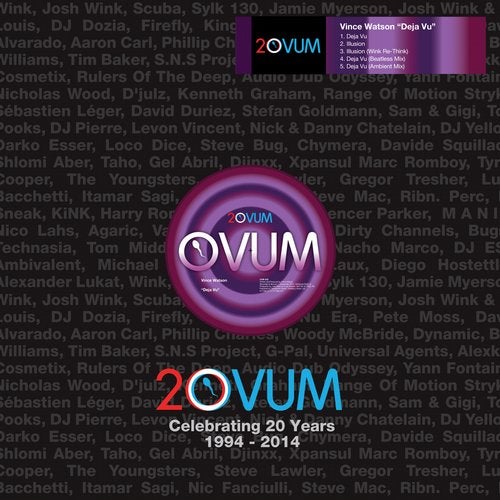 Ovums 20th birthday celebrations continue with Vince Watson Déjà vu!How do you end an amazing 20th Anniversary Celebration? We think weve figured out our final flourish by bringing you the last of our 20th Anniversary year from the amazing Vince Watson. This is also our 250th release and a package that not only includes a remix from label boss Josh Wink, but features two bonus digital tracks that see Vince delving into his ambient side. A true celebration.... We bring you Déjà vu. Vince Watson is one of the house-techno crossover pioneers and helped facilitate the tech-house genres appeal to the masses. A long musical history saw him release his debut album Biologue at the end of the Millenium on Alola. The album was a big success and included the now classic track Mystical Rhythm. His work had a huge impact on the global electronic scene for setting a personal hypnotic perspective of groovy, melody and atmospheric sounds, a unique signature sound. He would continue his relationship with Alola, but also record for such acclaimed labels as Delsin, Planet E, and FU F CCOM. He went on to establish his own labels Bio and Everysoul. 2014 saw Vince step out and explore new and old relationships in regards to his releases. He rekindled his relationship with Plant E and released on Poker Flat, Bedrock and Cocoon. We are excited to say that now Vince is gracing Ovum on what will be our 250th release and the final culmination of what has been an incredible 20th Anniversary Celebration. Deja Vu is an incredible slice of deep and emotional techno. Prepare to be taken on a bubbly ride with many twists and turns and an all-enveloping groove. The deepness is there, but this track still packs a serious punch. Illusion is a wonderful combination of beauty and musicality with an inspiring drive. Illusion sees Vince taking us from the dark into the light. A gorgeous hypnotic piece that will surely become a future classic. Josh Wink delivers his own twist on Illusion. Staying true to the original Wink adds his own trademark tweeks and discreet acid touch, matching frenetic percussion with the sweeping synths of Watsons original. Beautiful and epic. Alongside the stunning original mix of Deja Vu Vince also presents two of his unique and trademark Ambient and Beatless mixes. A special brace of mixes to fully immerse ourselves within and a perfect way to complete our anniversary package. !