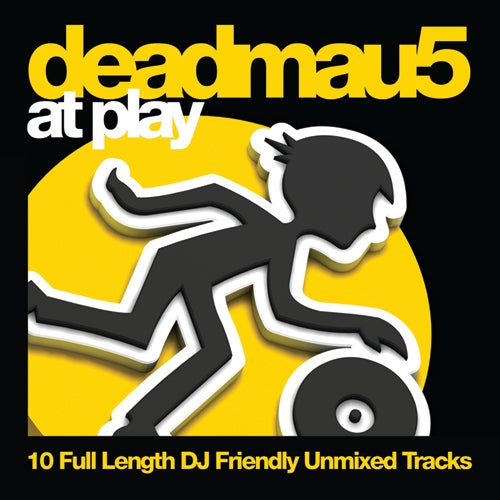 Producer Du Jour Uncovers His Bag Of Unreleased Gems Flavour of the moment and producer/DJ extraordinaire, Canada’s Deadmau5 AKA Joel Zimmerman, digs deep and goes back to his roots with 10 scintillating unreleased electro-tinged gems from Deadmau5’s freshman label, Play Records. Debuting on DJ Mag’s hallowed annual Top 100 DJ poll at #11 – the highest new entry ever, beating the likes of the legendary DJ’s Paul Oakenfold and Carl Cox, Deadmau5 –pronounced ‘Dead Mouse’ is riding the crest of a very in-demand musical wave. Now with Deadmau5 floating high on the A list circuit, getting splashed on the covers of magazines and packing it out at the world’s largest clubs, ‘Deadmau5 at Play’ is a timely reminder of a talent discovered and music that was well ahead of its time. The unmixed LP features club favourites like ‘Faxing Berlin’ and ‘Vanishing Point’. Also included in the package are Deadmau5’s collaborations with Play Records founder and owner, Melleefresh. Tracks like ‘Afterhours’, which charted at number one on Beatport’s Top 100 and nominated for best dance track at the JUNO awards (Canada’s equivalent of the Grammy’s) sit alongside old school favourites like ‘Cocktail Queen’ and ‘Hey Baby’ making this a true collector’s treat! International electro-house dance diva and world renowned club bunny, Melleny Melody aka Melleefresh launched Play Records in 1996 with partner in crime, DJ Spydabrown. Over the years, Play Records has become one of Canada's foremost labels for electro house and an internationally recognised purveyor of "new, fresh and bangin' vibes for the dancefloor.” Melleny’s most recent collaboration has proved to be the most exciting yet. After discovering a talented DJ by the name of Joel Zimmerman (soon to be Deadmau5) in the bleak club land of Niagara Falls, Melleny brought him to Toronto, put him up at Play Records headquarters and thus began a fortuitous partnership in music. Melleefresh vs. Deadmau5 began to collaborate on remixes of Melleefresh's hit ‘Beautiful Rich & Horny’. After a great UK response from the vinyl remixes (not to mention a notorious youtube video of four girls lip synching the song in their car across the English countryside), Melleefresh and Deadmau5 began working on new original material that consists of what can be joyfully described as a dirty mix of filthy, trashed-out, and downright sexy electro-house. Melleefresh and Deadmau5’s music has been included on some of the worlds top DJ playlists which include Pete Tong, Judge Jules, Chris Lake, Kid Dub, Matt Darey, John Aquaviva, Morten Alick, Jonathan Peters, DJ Sammy, DJ Aero and the notorious Tommy Lee of Motley Crue fame with whom she was invited to perform in the 2006 Montreal No Speed Limit Festival.