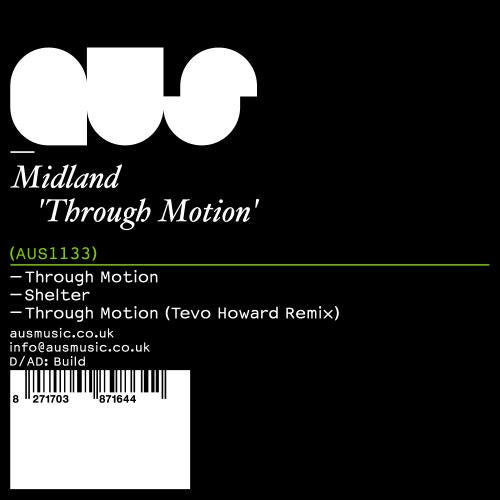 Last year put Leeds-based Producer Midlands (aka Harry Agius) name on the map with his successful collaboration with Hessle Audio's Ramadanman, "Your Words Matter" on Aus Music. This year, Aus label chief Will Saul has invited Midland back to take a solo swing. It's an excursion that explores the boundaries of 2-step, UK Garage and techno and consists of two original tracks and a remix from Chicago DJ/Producer and head of Beautiful Granville Records, Tevo Howard.

On the A side 'Through Motion" shows Midland's ability to seamlessly take the spirit of UK Garage and fuse it with techno. The track's moody piano melody is punctured by a dark, pitch-shifted vocal and encircled by the warm atmospherics that have become his trademark. On the flip side is 'Shelter', a brooding and cavernous affair whose vocals and whispery atmospherics make this the perfect late night tool. The emphasis on the development within the track is evident and will find favour with djs whose sets take a narrative approach and who like to tell a story withintheir sets.

For the remix, Tevo Howard takes "Through Motion" back to basics and gives it a drum machine work-out. Recordedin a single take, this stripped back production approach is Tevo's sound signature and makes for a seriously jacking groove. In addition to his work with Ramadanman, last year Midland released 'Play the Game' EP on Phonica and followed it up with this year's 'Bring Joy' on More Music as well as a number of well received remixes. Known for his varied musical taste and all encompassing DJ sets his music has found favour with djs from across the spectrum andthis release further cements this reputation.