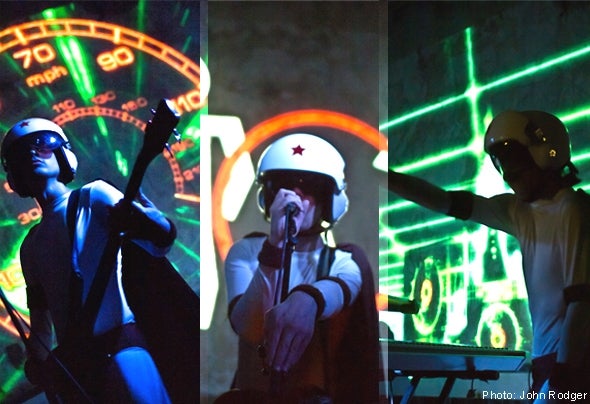 2007: Ultra Sheriff started as a home studio project in Trondheim (Norway) in 2007, when the brothers Edward and Torjus Førre Erfjord from Stavanger (Norway) met Nils Iver Holtar from Oslo (Norway). The conceptual framework of the band was immediately realized, and the following two years were spent on songwriting, and acquiring the technical skills needed to perform live. 2009: In May, Ultra Sheriff played their first concert, complete with synchronized graphics made by the band's animator and fancy costumes and cosmonaut helmets. In 2009, Ultra Sheriff played Folken (venue in Stavanger) ,animation festivals in Volda and Fredrikstad, and also visited the Hamar. 2010: More gigs lined up and more still in the pipeline. The live shows are constantly updated with new songs and graphics. The response has been overwhelming, with the release of their debut album 'Galactic Fame' comes up, all ready for the robot invasion. 2011: Ultra Sheriff does some outstanding concerts in Norway (Trondheim, Bergen, Stavanger, Hamar and Oslo to name a few). Ultra Sheriff were the band everybody talked about at The ElektroStat Festival in Oslo, after their concert (where they went on before Recoil (Alan Wilder, Depeche Mode)). Torjus Previous Erfjord and his animation studio (Rain Dog Studios), does an animation video for the song “Blodtørst” by the band Kveletak.2012: www.ultrasheriff.com is launched April 1. And in anticipation of a sequel to 'Galactic Fame' (2010), it is decided to release an EP. "Decepiton, Oil & Laser Bems" is released digitally, through Section Z Records, June 18. It is also planned a physical release, also on vinyl. Torjus Førre Erfjord and his animation studio (Rain Dog Studios), wins award for the video "blodtørst" by the band Kveletak. In cooperation with Nordre Aker district In Oslo, Ultra Sheriff will do pieces from Peer Gynt by Edvard Grieg, for the event “Elvelangs i Fakkelys” 20 September.