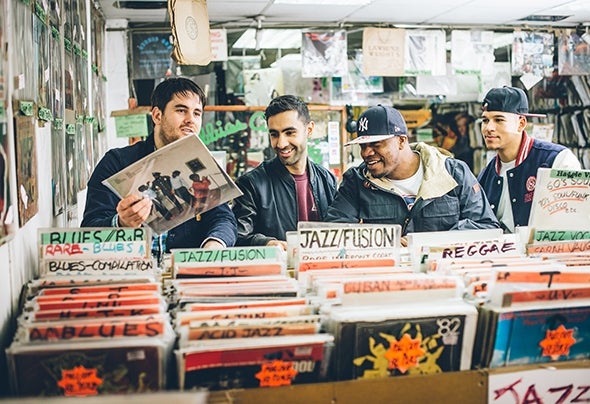 Bursting out of London’s underground music scene with its thrilling world of pirate radio, crude DJ set ups, improvised studios, and bleeding edge beats come Rudimental (Piers Aggett, Kesi Dryden, Amir Amor and Leon Rolle): A pioneering melting-pot collective who have taken the British music scene by storm, championed for their uncompromising approach to music-making whilst avoiding rigid classification.You’ve probably heard them – from their huge drum & bass-meets-soul anthem and No. 1 single ‘Feel The Love’; their ‘Later... with Jools Holland’ TV performance; their historic BBC Radio 1 Hackney Weekend extravaganza (which saw their second ever live show become the most shared performance of the entire festival); or been immersed in the thrilling energy of their live shows, DJ sets or groundbreaking videos. Rudimental have achieved global recognition among tastemakers at lightning speed – starting when The XX blogged Rudimental’s airy soulful house offering ‘Spoons’ in February.Taking a “traditional” songwriting approach as much as an electronic one in their music making, Rudimental mix live instrumentation (Hammond, Rhodes, horns, live bass etc) with digital programming. As Rudimental’s Piers says, “our sound is organic. It’s the result of years of raving, listening to pirate radio, listening to dubs, to tapes older brothers would bring home, and being inspired by all of it. We’re products of our individual musical journeys and of London”.While Kesi (keyboard player/percussionist) is a self- confessed hip hop head, former Deja Vu FM DJ, Piers (Hammond, keys) names jazz and blues as influences alongside grime artists like Dizzee Rascal. Leon (DJ) remembers using his dinner money to purchase the latest vinyl and attributes the band’s success to an ability to retool and subvert the best of UK underground music (garage, grime, dubstep, drum & bass) in their own style. Fellow band mate Amir (guitar and keys), grew up in Camden and won a PRS song writing award in 2001. He spent the winnings on a guitar and via a mentoring scheme, met Plan B who taught him how to play his first chords aged 16. He went on to earn nods as one of NME ‘Top 20 Hottest Producers’. Amir says of the Rudimental sound: “The unifying thing is the soul influence and the bass influence, those two things are always there”“Rudimental” (so-named after the Rudiments book of piano exercises Kesi’s music teacher drilled him on as a child) write as a group pulling from one another’s strengths. The result of this sound-clash style is bubbling with energy, with thick, layered basslines, live instruments, and contagious hooks that both reflects London and translates outside the city.Human, yet cutting-edge music, it creates a strong connection with the listener: as Piers says “It’s important for us to tell a story as much as we can about the things we’re passionate about – what’s happening on a grassroots level in cities, because that’s where we come from”. This is something the band have espoused in the brilliant promo films for the singles ‘Feel The Love’ and ‘Not Giving In’ : respectively documenting the horse-riding lifestyle of North Philadelphia’s Fletcher Street and the perilous yet vibrant culture of Manila’s slums. It is these fundamental human and emotional aspects coupled with sonic experimentation that has created some of the most forward-looking music and videos this year.Freeing themselves from one specific sound, and the shackles of creating electronic music with a laptop, the boys take influence from each others varying musical strengths and their unifying starting point (Hackney). Around them in Hackney the band have found a well of untapped talent – be that ‘Feel The Love’s’ vocalist John Newman or trumpeter extraordinaire Mark Crown. This extended family, or wider orbiting collective, reads like a who’s who of emerging UK talent – MNEK, Syron, Sinead Harnett – but also includes a wealth of musicians: brass players, percussionists, string players. The result on stage sounds, and feels, like a genuine carnival: brimming with spontaneous energy and infectious to all.During an Olympic year that has catapulted the culture, talent and passion of Hackney to the forefront of Britain’s if not the World’s consciousness, Rudimental have brought an injection of life to the charts and made an indelible mark on British pop culture in a short few months. This heralds a rich album from the band in the New Year.As the band say “What unites us all really is our love of soulfulness on the dance floor. We want people to dance and to feel something”. This band of writers, musicians and DJs are an example of possessing that rare thing: a collective of innovators seamlessly coming together and striking gold.