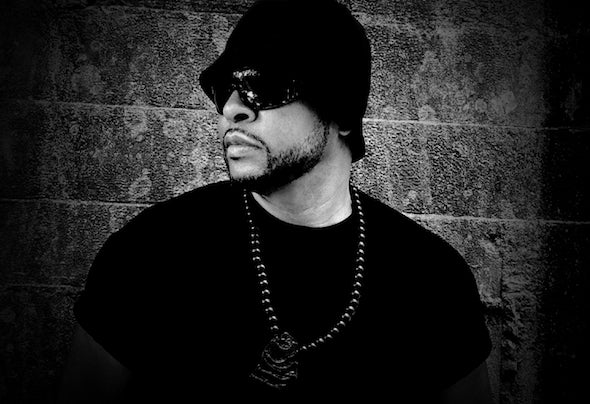 With underground parties and raves, the word began to spread that Mark Flash was a name to be loved if you were a party or club goer and respected if you were a DJ. Mark Flash joined forces with LOS HERMANOS : Gerald Mitchell and Ray 7, TIMELINE : De’Sean Jones, Jon Dixon, Mark Flash, Mike Banks, DEPTH CHARGE : Mark Flash and Mike Banks strictly Detroit style and more recently started his own band known as D3 [DETROIT TRIO LIVE] : Jon Dixon - keyboardist extraordinaire & De’Sean Jones - saxophone genius. Traveling internationally, he has shown the world that there’s more to him than just the typical DJ. With skills in keyboards and percussion, Mark Flash puts on a unique show utilizing his talents to form a musical hybrid. As a member of Underground Resistance [UR-078], Flash has taken on multiple projects such as upcoming remixes, new releases, dj mixes, collaborations, performing at local/international events and charity benefits, Mark Flash will announcing his new label “AUDIO FLUID” coming soon. Mark Flash is still participating as a mentor for Red Bull Music Academy, SPIN University and Dj School Chile, helping new and upcoming Djs, musicians reach their musical goals while also teaching them about the rich musical history of Detroit and how it helped shape the music industry from past to present. “WITH ME, IT’S ALWAYS BEEN ABOUT THE MUSIC. I DON’T CARE HOW FAMOUS YOU THINK YOU ARE... I WILL ALWAYS STAND BEHIND MY MUSIC, NOT IN FRONT OF IT" - MARK FLASH http://facbook.com/markflash http://twitter.com/MARKFLASH http://markflashdetroit.tumblr.com http://www.linkedin.com/in/mark-flash