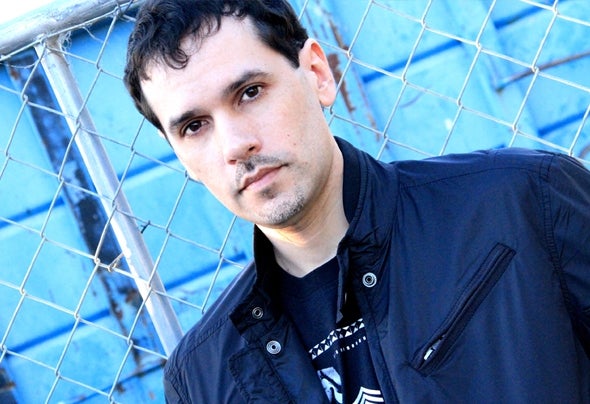 Much like his mythological philosopher-magician namesake, DJ Faust is ahead of the learning curve. In 1998, Faust made history with the release of the first full-length, all-scratching album in history, the critically lauded Man Or Myth. He has since released multiple albums as a solo artist and with DJ Shortee as well as countless singles, remixes, and mix cds. In 2006, alongside partner Shortee, they launched their first labels, Heavy Artillery Recordings and 5 Star Records. With a rapid string of releases for fuel covering everything from Electro, Dubstep, D&B , Drumstep and more, their labels have made a lasting mark in the global electronic music scene. Heavy Artillery Recordings was voted Symphonic Distributions label of the year for 2011.Faust’s music has attracted licensing features that have aired worldwide on networks such as MTV, NBC, CNN & ESPN on programs like the X-Games, Tony Hawk’s Skate Park Tour, Hip-Hop Nation, Headline News & the esteemed World Cup 2002. The duo's song "Drumcircle" (Digital Soul) is the official theme song for "MTV SPORTS UNLIMITED AXXESS" & his visionary skills as a DJ & Producer have earned him rave reviews in publications such as Spin, Urb, Rolling Stone, NY Times, Washington Post, DJ Times, Remix, XLR8R, Venus, Vice, etc. as well as ranking as of one of the top 5 turntablists in the world by Spin Magazine.Faust's contributions to Scratching, Beat Juggling and party rockin' earned him a spot in Doug Prays' award winning documentary SCRATCH seen in theatres across the globe as well as networks HBO, VH1, Cinemax, Showtime, Sundance, Independent Film Channel & more. Faust has made media appearances on TV shows such as NBC's National TV Show "Hip Hop Nation", CNN's "Headline News" & throughout the friendly skies on CNN Inflight's "Showbiz This Month".Faust’s mix is seamless whether he appears solo or part of a group & is well-known for his one-of-a-kind 4-turntable transmissions alongside his wife DJ Short ee. T oget her t hey’ve t oured t he world displaying their unique chemistry, bangin heavy beats as one. Today, with decades of experience in multiple genres Faust continues to rock parties as one of the most versatile DJs in the business.E-mailArtist NameBeatport URLWebsitePRESS QUOTES: “DJ Faust presents one of the most unbelievable scratch presentations in an album format ever!” XLR8R MAGAZINE"“In Faust’s hands, turntablism is as breakneck virtuosic as bebop, as bereft of melody as modern classical – but way to committed to putting the boogie in your butt for the curatorial staff to start sniffin’ around.” SPIN MAGAZINE“Faust, able to adapt turntables as a musical instrument, creates a dimension of sound and imagination that teleports the listener into a surreal world of music.” MUZIK MAGAZINE“DJ Faust may very well be the most original turntablist to put tracks on wax in years.” CMJ NEW MUSIC MONTHLYFAUST is one of SPIN's TOP 13 TURNTABLISTS IN THE WORLD -- ranked # 5!! "Painstakingly edits together zillions of Proustian hip- hop moments with turntables... The results are juicy but fat-free Steinski-style scratch boogie symphonies” SPIN MAGAZINE“Faust’s scratches, juggles, and even skipping records coalesce into one giant itchy symphony with movement after movement of next-level skills taking the listener on an aural voyage through Faust’s ill psyche.” VICE MAGAZINE“Along with the arrival of the new millennium comes the advancement of music and how the world creates it. A world reigned by DJ Faust.” iMUSIC WEBSITE“Faust puts old-school hip-hop through a Technics blender for an accelerated history lesson that’s too damn funky for your room.” ALTERNATIVE PRESS“Dj Faust’s ‘MAN OR MYTH?’ is a dazzlingly virtuosic showcase for Atlanta’s subterranean DJ scene.” ROLLING STONE