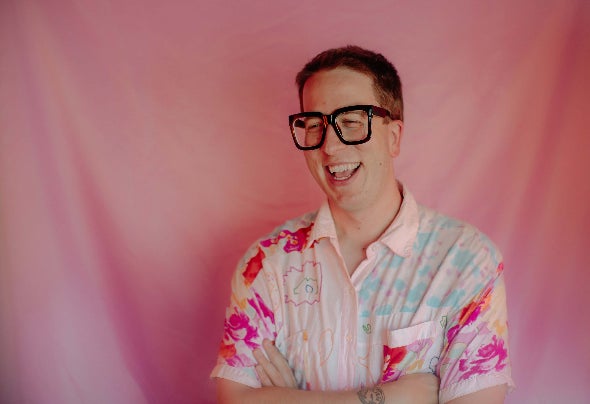 Chrissy is a genre-bending DJ/producer with releases on Hooversound Recordings, Sorry Records, Classic Music Company, 17 Steps, Dansu Discs, Pets Recordings, and more. He’s known for his friendly demeanor, big smile, and unwavering support for new artists and marginalized communities in our scene—traits that shine through in his expansive, multi-genre DJ sets. His selections often center on rave music, Chicago house, and disco, but his multi-decade career has ranged from jungle to footwork to freestyle. This unique form of story-telling has brought him to venues such as Panorama Bar, Smartbar (where he held a residency from 2015 to 2018), and his residency at San Francisco’s oldest and most storied queer club, The Stud. Also known as a well-regarded voice on dance music history, Chrissy ran the popular “My Year of Mixtapes” blog posting original genre-focused DJ mixes every week for a year. He also wrote the liner notes for Hardcore Traxx: Dance Mania Records 1986- 1997 and has written on dance music history, queer history, and advice for young musicians in Mixmag, Beatportal, DJ Mag, Red Bull Music Academy, XLR8R, and Electronic Beats. “The living embodiment of a ‘DJ’s DJ’” — Mixmag “Chrissy is one of the best DJs to ever walk the earth and I am just going to keep saying it until everyone agrees with me.” — The Blessed Madonna “Chrissy is one of my fave people in music. He's not only extremely talented and a walking talking dance encyclopaedia, he is also someone whose stance I really respect...he actively tries to debunk the gatekeeper mentality that dance music is sadly still haunted by, all with a really constructive approach and positive attitude, truly opening doors for newer blood.” — Violet “One of the most versatile and knowledgeable DJ/producers on the planet” — Jerome Hill