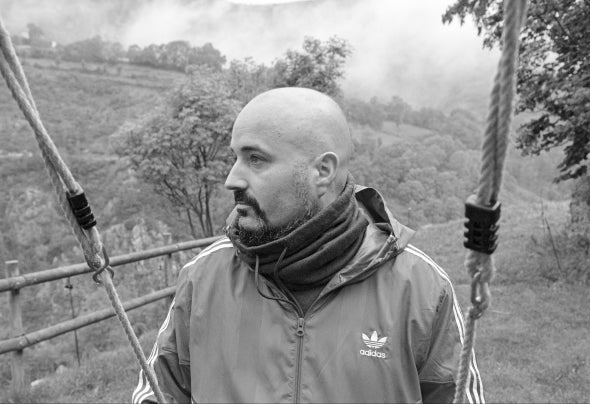 A legend says a tiny baby basket was coming down the Guadalquivir river, inside a little one surrounded by cassette-tapes, a black cap and booties with phosphorescent ties. That fable was extended to 135bpm up to the present day, that little ‘angel’ was none other than Brunetto.Musician, composer, DJ and music journalist born in Seville but based in Barcelona city whose passion for music far exceeds that one by Tim Burton for skinny and pallid face characters.Artist developed in the broken beats school, which has continued throughout its evolution without removing ear. Since that 80’s funky-rap going through the trip hop, 90’s rockist UK big beats, to post-dubstep, IDM or present furure bass. Eclectic and connoisseur of the most important, what is in front of him, the audience! Same is able to keep busy a jammed floor with a blast of super danceable electronic music, than dazzle it with subtle sounds and textures. Multiskilling boy who equally loves Orbital, Kavinsky, Dust Brothers and Boards of Canada.We could bore up even an oyster listing all the events and Fests where have been playing. To name a few: Sónar, Move, Klubbers Day, Space of Sound, Territorios, Electroshock, Observatori, etc. Coordinated music for massive Nokia, Red Bull or Suzuki events. It has also left the imprint of his Adidas by countries like Canada, Germany or France.As for his work as a musician, we take a breath and summarize... 3 solo albums released (“Déjalo así Bru”, “Homeself” y “B+”), the fourth -”Sheroine”- is set to be released on Irregular imprint in April, 2014. First song from this new LP is “Evergreen” featuring I AM DIVE. Add to the solo albums soundtracks for documentaries (“La casa de las sirenas”, “El fantasma de los deseos”...), music for commercials (“SAS”, “Pezqueñines”, “Barbadillos”, “Ikea”, “Baumann”, “Casio Exilim Lab”...), interactive books (“Guía de buceo de la Isla del Hierro y Tenerife”, “César redivido”), and remixed artists like Pulshar, The Suicide Of Western Culture, Nomadic Firs, Lasers, Anika Sade ... To don’t forget his very first band, Bockors (1997-2000) a sensation in Spain in that time, opening for bands like T he Prodigy, T he Chemical Brothers, Lunatic Calm or Junkie XL.He feels akin to artists like mentioned Boards of Canada, U.N.K.L.E, Death In Vegas, Trent Reznor, Trentemoller, Mondkopf, Agent Provocateur, WARP and Anticon labels, Chopin, Badalamenti or Vangelis. Brunetto, and forget prejudices.