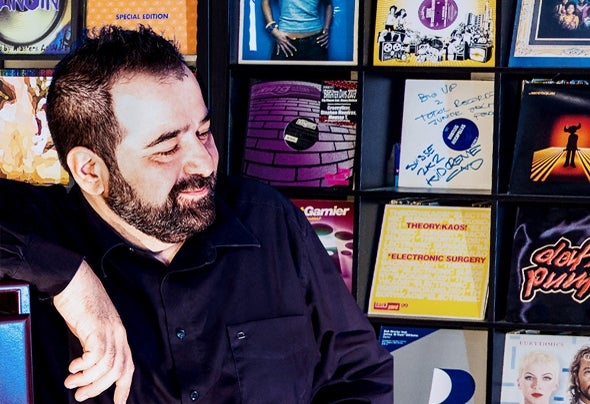 ANGELO D'ANTONIO (Abused Disco) is a professional DJ Producer residing in the beautiful country of Switzerland. Born in 1972, Angelo immediately discovered his passion for music whilst unveiling some of the great tunes from the unique 80’s era, including his very first 12” - New Order's, “Blue Monday” and it was exactly that same record which initiated his career as a professional DJ. During the late 90’s, Angelo meets up with good friend GIUSEPPE COTTONE (aka) DJ JUICEPPE, who very quickly confirms the quality of ANGELO's savoir-faire and profound knowledge in music. In 1998 the duo create GROOVYLIZER and instantaneously launch their own hit-factory, giving life to internationally renowned tunes like BIG MOSES, "Brighter Day", LITTLE LOUIE VEGA “Elements of life”, JANET JACKSON “Alright”, NU COLORS “Yes I will”, GOSPEL TRUTH “Stand up” and RAINBOW PEOPLE “He's my natural high”. As their inner sense for avant-garde leads them into new musical territories, THEORY KAOS, “How can this be wrong (Electronic Surgery)” was born in a wink and invades all dance floors around the Globe. As a matter of fact, their plight of energy pushes them in the right direction and GROOVYLIZER catapults a massive hit with their brand new alias PIQUE & NIQUE - SPACE COWBOY, “Crazy talk”. FAT BOY SLIM's, SOUTHERN FRIED RECORDS did not take long to sign this unmistakable tune!! ANGELO's life was fulfilled and fueled with so many exclusive encounters. DJ's from all over the World wanted to work with him and lastly his family members and cousins the FOURFUNTY, an incredibly talented quartet, endorsed ANGELO to polish his musical skills as an acclaimed DJ, musician and producer. In 2006, during a trip through good old Europe, ANGELO and GIUSEPPE decided to amaze their large community with an extraordinary idea. They release a Pop album entitled, “Requiem of a tortured soul” with their new alias VITRIOL with GIUSEPPE himself on vocals. This album allowed them to move back in time and reconstruct the distinguished sound of the 80's in their own way. An electronic chef d'oeuvre including pearls like, “The World Committed a Crime” and “Runaway Girl”. What goes around comes around and due to the reaction of that album, ANGELO becomes acquainted with future new member of the band ENZO DI CAPRIO. His eclectic agility and multifarious art de vivre bolster the latterly formed trio. Like a hurricane they created SIKK and stormed ahead with “My washing machine” to the top of all dance floor charts and simultaneously invented a new era of Electro House. SIKK was literally in everyone's mouth! After a short musical break, ANGELO strikes back with his new protégé, FLORIAN ENGGENWEILER and forms STEREO FISH in 2012. An immediate co-operation with YVES LAROCK arises and “STRANGE WORLD” gets remixed. Due to this co-operation, STEREO FISH were promptly involved in producing the hymn, “Criminals (Welcome to reality)” for the ZURICH PRIDE FESTIVAL 2012. Currently Angelo produces under the alias “Abused Disco”.