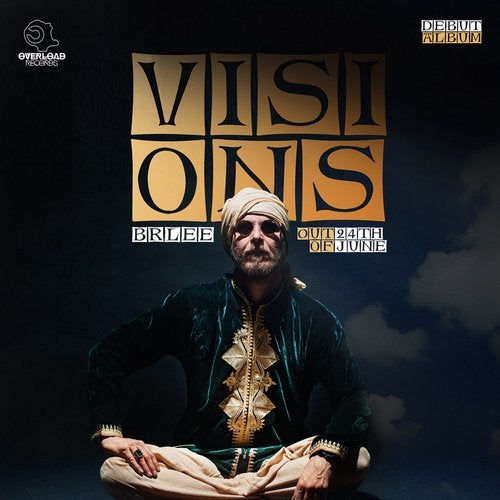 Brlee (Overload Records)
Debut album "Visions" will be released on the 24th of June 2020 The Album is produced in Ljubljana (Slovenia) and mixed and mastered in Berlin (Germany). What do you see in your dreams? What transcends you to a state of trance, deep thoughts, to a manifestation of supernatural senses? What are your visions?
Is it something of this world, or do you allow yourself to dream big and above what we perceive as worldly? DJ & Producer Brlee comes from the small Slovenian town of Velenje, a town in the heart of Europe that gave a home to a talent who's name is now well known in the world of music. Challenging oneself to concur music, makes this man's life force an impressive one. One that made Ibiza his second home, balancing out one's life with, the probably, best world-known destination of life celebration and dreams. What we allow ourselves to see only depends on how we look at the world. Butt looking does not always mean truly seeing. The name of this album suggests just that. And questions that what we may think only relies on what our eye's transfer to our brain. After five long years of travels and taking in everything from the smells, sights and sounds of the world, one comes to the realisation that ''seeing is believing''. You may look, but you may never find. You may look, but still, never see. Only when you start seeing your visions as clear as the path below your feet, do you realize there might not be that much in-between worlds that are miles apart. After years of successful collaborations with the zenith of music producers and artists, has Brlee created a vision of the world, that must be shared with the world. Brlee's work has been recognized by some of the finest names of the music business, who without much consideration accepted to collaborate with Brlee's peerless skills. It is always said that ''it takes one to know one''. So there is no surprise that 12 new songs include collabs with big names, such as Magdalena, Marc DePulse, Several Definition, Marc Grabber, Purple Pill & Cajhen, who have all taken part and are a vital division of Brlee's ''Visions''. By releasing four videos for the four announcing singles, he created both a visual and acoustic journey through the spaces and worlds of Tel Aviv, Ibiza, Marocco and Slovenia. Having a vision may, however, mean little if it is not transmitted onto others. Having great names like Solomun, the Adana Twins, Ame, Audiofly, Guy J, the Kollektiv Turmstrasse share that vision and support it, only stands to prove how we may all be connected by sharing the things we see and hear, feel and thrive for. The honour of having such fine names play ''Vision's'' makes it only more of a great one, as they have been played on numerous great festivals, such as Tomorrowland and Cercle. There may have never been a time in which all people around the world have become bigger visionaries and dreamers, than today. We are bound to look at familiar things, each day, knowing we will look at them again and again, for some days to come. It is by looking and seeing the world in our narrow surroundings, do we challenge our minds to envision what we want to see, to dream of better times. A better world, a more connected world, a realm of bonds that could never be seen in material, physical form, but can be felt in every possible way. This is what the world tour of the album ''Visions'' will promote and what Brlee's visios is to build. Until this will be possible, ''Visions'' will continue to widen and bring together our worlds, worlds of music, worlds of feelings, worlds of visions.