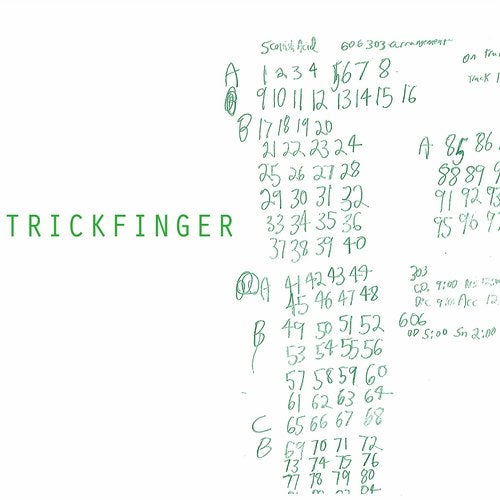 The latest chapter in the electronic evolution of guitarist John Frusciante features a new project under his Trickfinger guise and has him utilizing the classic hardware that spawned the eternal acid template. Frusciante's desire to cede control to machines has paradoxically allowed him to present a singular take on elemental dance music, a brilliant and unexpected entry into Acid Test's growing canon of modern, 303-focused dance music.Words from the ArtistI started being serious about following my dream to make electronic music, and to be my own engineer, five years ago. For the 10 years prior to that, I had been playing guitar along with a wide range of different types of programmed synthesizer and sample based music, emulating as best as I could, what I heard. I found that the languages machines forced programmers to think in had caused them to discover a new musical vocabulary. The various forms of electronically generated music, particularly in the last 22 years, have introduced many new principles of rhythm, melody, and harmony. I would learn what someone had programmed but their thought process eluded me. Programmers, particularly ones fluent on machines from the early 80s and/or tracker programs from the 90s, clearly had a theoretical foundation in their employ but it was not the theory I knew from pop/rock, jazz or classical. The hands relationship to the instrument accounts for so much of why musicians do what they do, and I had come to feel that in pop/rock my mind was often being overpowered by my hand, which I had a strong desire to correct. I was obsessed with music where machine intelligence and human intelligence seemed to be bouncing off one another, each expanding with the incorporation of what it received from the other.In 2007 I started to learn how to program all the instruments we associate with Acid House music and some other hardware. For about 7 months I didnt record anything. Then I started recording, playing 10 or so synced machines through a small mixer into a CD burner. This was all experimental Acid House, my skills at making rock music playing no part in it whatsoever. I had lost interest in traditional songwriting and I was excited about finding new methods for creating music. Id surround myself with machines, program one and then another and enjoy what was a fascinating process from beginning to end. I was so excited by the method of using numbers much in the same way Id used my muscles all my life. Skills that had previously been applied by my subconscious were gradually becoming conscious, by virtue of having numerical theoretical means of thinking about rhythm, melody and sound.In summary, Acid served as a good starting point for me, very gradually leading me to be able to combine whatever styles of music I want, as a one man band. - John