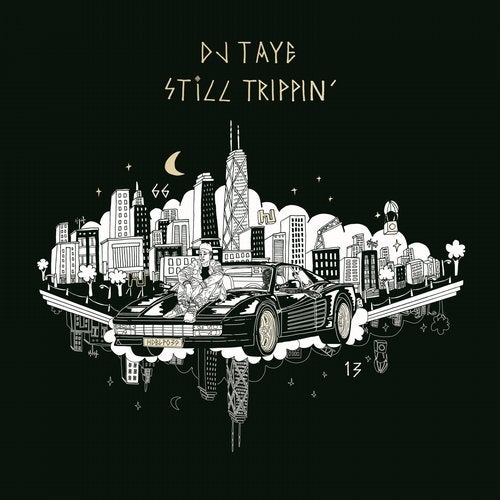 A generation younger than the founders of the Teklife crew, DJ Rashad and DJ Spinn, DJ Taye was originally a rapper and beat maker before hooking up with the collective and jumping into the world of footwork production and DJing. However, it was Rashad's untimely passing in 2014 that was the unlikely catalyst for developing the sounds and ideas for this album. He says, "When Rashad passed away I felt inspired to continue evolving the music that I loved so much coming up in this world. So, I had to do something…make something brand new."

100%% committed to pushing further the potential of the footwork template, Still Trippin' is ambitious in its range and scope. Taking two years to formulate, the record broadens the possibilities of the sound, forcing it to adapt to songwriting, and also revives Taye's talent for MCing and producing beats to which he can rap and sing. Furthermore Taye definitely ups the ante with his complex and precise drum programming, never losing sight of footwork's ability to confound.

The album features a range of guests that span contemporary music; the eccentric, instructive rapping of Chuck Inglish of Detroit duo the Cool Kids is featured on 'Get It Jukin', Odile Myrtil, a young vocalist from Montreal, lends her smokey soul to 'Same Sound', Fabi Reyna, the editor of the celebrated women's guitar magazine She Shreds, sings and plays bass and rhythm guitar on 'I Don't Know' and Jersey club queen UNIIQU3 offers production and rapping on 'Gimme Some Mo'.Also, Teklife members DJ PayPal and DJ Manny assist on production, and DJ Lucky is a guest MC on 'Smokeout'.

Taye is ambitious in his hopes for the album; "I took this as an opportunity to not have boundaries with footwork. Different approaches to our 'underground' sound to make it broader. It's only underground until it crosses that visible threshold." This album brings all of this to the forefront