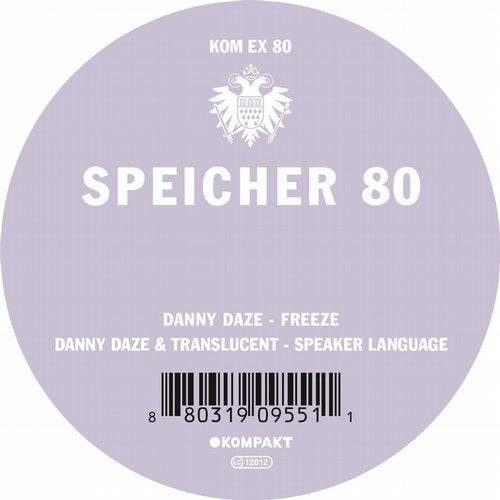 Exclusive
Starting out in 2001 to tie up some loose ends from our regulars, SPEICHER has since become a guarantee for vanguard dance sounds from all over the planet, allowing KOMPAKT to invite and support electronic artists that comfortably inhabit both the delicate and the more deliberate ends of the electronic music spectrum. For SPEICHER 80, Miami-based DJ/producer DANNY DAZE presents two powerful cuts where heady playfulness and dreamy ambience meet the raw energy of muscular basslines and bouncing beats.

A DJ since 1999, DANNY DAZE would be performing weddings at 14 years old, financing his growing vinyl habit with the hard-earned money. Influenced by booming Miami bass, tracksuit booty beats, sizzling electro and futuristic techno, he started gearing up to producing his own tunes -leading to sought-after outings on highly respected labels like Maceo Plex's Ellum Audio, Jimmy Edgar's Ultramajic or UK-based tastemaker pool Hot Creations. It's with the latter that he landed his probably biggest hit so far, the neon-lit, shockingly catchy "Your Everything", recognized by Michael Mayer as a "rough und muscular sound" that fits in perfectly with the Speicher series.

Getting right down to business, FREEZE proves to be an immensely bendy, yet vigorous floor charmer that deliberately lets its propulsive rhythm patterns overgrow with swelling pads and epic synths. What's most striking here is the refreshing ease and stylistic versatility that DANNY DAZE brings to the production table, drawing from a rich background in bass-heavy sonics and blending its varying intensities with surprising facility. A true dance chameleon and champion of all things sweaty, Danny ventures further into La la land with SPEAKER LANGUAGE, a ridiculously infectious groove setting the scene for TRANSLUSCENT's empowering vocal interjections. Together, these cuts make for a hell of a ride, two heat-seeking missiles on their way to the center of the dance floor.