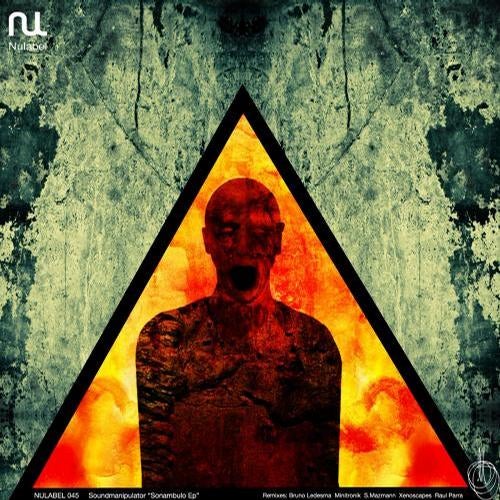 Nulabel's worst nightmares come back through Sonambulo EP, by Soundmanipulator.
After the great surprise of Informacion Mortal EP, Soundmanipulator presents his second work at NuLabel, Sonambulo, in which he keeps with his characteristic Techno-minimal style, made by deep and dark sounds, and also sonorous complex and futuristic mazes originated by the most advanced tecniques of musical creation.
The first track is Imajen, which starts with a Techno repetitive loop that introduces electronic and dark Minimal sounds. He plays with the rhythm changes and the dissolving sounds, creating a feeling of forcefulness over the whole track.
The second track, 7, shows an elaborated, remote and very danceable Minimal sound. It starts with a lot of strength, inserting vocals and technological sounds, almost from a computer, hidden behind the mask of darkness that characterizes Soundmanipulator.
Besides, four of NuLabel's regular artists join Soundmanipulator in this musical adventure with their remixes. Bruno Ledesma provides 7 with Techno resonances; Xenoscape provides his massive and eclectic sound; S. Mazmann exponentially increases the speed of the track and Minitronik plays with the atmospheres and the low-pitched sounds.
All this artists are joined by Raul Parra, an artist well-known for the last 10 years for his livesets at the spanish Techno scene. He gives 7 a more rhythmic and powerful background than the original one.
In conclusion, Sonambulo EP brings a dark universe made by massive, explosive and visceral sounds that won't leave you indifferent.