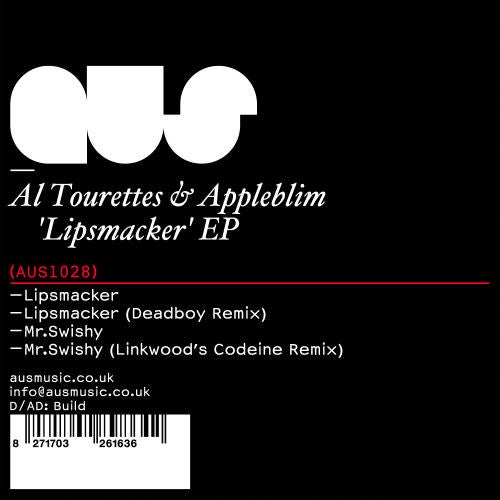 Will Saul's AUS imprint returns with the Lipsmacker EP, a collaboration between Bristol-based bass enthusiasts Al Tourettes and Appleblim. Continuing Aus recent trend of fusing elements of traditional house and techno with the sub frequencies and rhythms of dubstep, the EP comes as a slice of forward thinking electronic music that continues to reinforce the ever-strengthening relationship between the two musical camps.

Al Tourettes, known to his Mum & Dad as Alec Storey, has been playing drums since he was 9. Beginning his DJ career at age 15, Alec began composing on an Atari two years later. After studying Creative Music Technology at Uni - incidentally the same course taken by Appleblim, Gatekeeper and Wedge - releases on Growth, KracktroniK and Input Output followed. Laurie Osbourne aka Appleblim needs little introduction. Head of Applepips and co-founder of Skull Disco, Appleblim has been at the forefront of the bass scene since its early inception. After meeting Al Tourettes in 2008, the duos musical partnership and
combined love for techno and dubstep soon resulted in remixes for Phonica Records and Ostgut Ton. Alongside their debut Aus release, 2010 will also see the release of a collaborative remix of Underworld.

The productions of South-East London based producer Deadboy tap into the cities rich musical heritage, referencing everything from Scott Walker to early 90s hardcore, in the midst of a rich dose of UK garage and house. With his tracks sharing the same sense of futuristic melancholia as the first wave of Detroit techno artists like Derrick May and Juan Atkins, his DJ sets showcase his love of Basic Channel and similarly dissonant dub-techno.