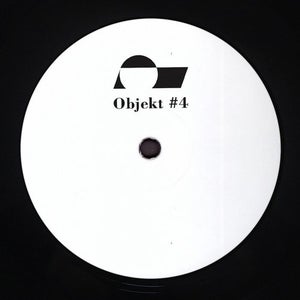 TJ Hertz's first original release since 2014's critically acclaimed Flatland comes in the form of Objekt #4, a continuation of his club-focused white label series and a tribute to the sadly now defunct Basement Q, a formative and beloved haunt in Berlin's Schoneberg district which quietly but profoundly shaped the musical identities of Hertz and several of his contemporaries until its final closure in 2012.

"There really was no place quite like it," remembers Hertz. "Even in the later years when Joe [Call Super] and I would go, the sense of vitality was palpable; you had all these regulars who must all have been pushing 50 years old but still had more energy and passion than any 25 year olds we knew at the time. God only knows what it must've been like in the 80s when it opened. I think it changed a bit over the years but I know the horse fresco on the ceiling was there from the start and the custom-built soundsystem too. Bogdan, the sage and amiable but somehow kinda unhinged old Bulgarian dude that owned and built the place, he had this obsession with right angles; he hated them, said they were fascist or something. So everything was slightly askew and you never quite knew which direction was up, much less when he or Emil or one of the other residents were playing. It was disorientating and beautiful and in the midst of such an experience your eyes would offer your brain no valid explanation for the wonderful confusion of sound that your ears were reporting. Meanwhile this old, fabulous, rave-weathered crowd of 40 to 60 people would be gradually losing their shit, feet glued to the floor but bodies flailing as if caught in a hurricane. It was something else."

The two tracks on Objekt #4 pay tribute to two of the many musical facets of Basement Q in its later years. A-side "Needle and Thread" aims to condense several hours of a Thursday night in the Basement into 9 minutes and 26 seconds, embellishing a hypnotic rolling techno backbone with hyper-detailed atmospherics, enchanting melodies and tight, strident breakbeats. B-side "Theme From Q" is Hertz's reinterpretation of a Basement Q anthem, owner and founder DJ Bogdan's own "Love Inna Basement (Morning Dub)", which never saw an official release despite providing the soundtrack to over 20 years of late morning love-ins in the cellar underneath the Sattler & Sohne glue factory. Together, the two tracks offer an incomplete but nonetheless seductive illustration of one of the most idiosyncratic and overlooked clubs in Berlin's recent history.