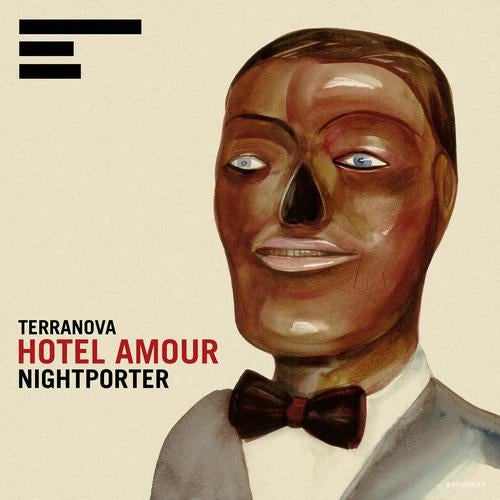 Long-standing underground project TERRANOVA returned in 2012 with HOTEL AMOUR, a brilliantly sequenced guide to 21st century House, and the albums success with both critics and fans proved band members Fetisch and &ME right. Now, they return with NIGHTPORTER, a comprehensive collection of remixes by dancefloor luminaries like Gui Boratto, Tiefschwarz, Rampa and many more. GUI BORATTO starts off proceedings with Hotel Amours last track Prayer featuring Udo Kier and Nicolette Krebitz on vocal duties, turning the introspective original into a true mover and shaker for the new age without tearing apart the songs delicate fabric. Followed by the Vinyl mix from Paris Is For Lovers, this makes for a formidable entry point to the Nightporter collection, setting its sights firmly on the floor. TIEFSCHWARZ keep the pace with their ingenious rework of Boogie For The Dollar, tightening the bolts where they see fit and slightly increasing the tension. It is then up to Keinemusiks RAMPA to show some remix love to Aint No Thing feat. Snax, one of Hotel Amours very best tracks, and hes doing a damn fine job in tweaking the atmosphere, cooking up a different feeling with the exact same ingredients. The same can be said for Rampas re-interpretation of Hotel Amour, the sources title track, where we witness him shaping up the rhythm section to new grades of intensity. Thats also what the TORB remix of Take My Hand is going for, as it takes a classically structured House blueprint and transforms it into a steamy, futuristic roller for the more adventurous moments of the night. Its a near-magical metamorphosis from a casual stroll on the floor to a full-scale walkabout through metropolitan nightlife, but thats no amazement to the initiated as no other than legendary MOTORBASS are hiding behind the Torb monicker. But it doesnt stop there: from DAVID MAYER losing himself in the seductive bassline of I Want To Go Out and RE:YOUs hallucinogenic groove patterns on Prayer to TILL VON SEINs pitch-perfect dub of Make Me Feel, from KINKs and ADAM PORTs epic re-imaginings of Question Mark to the rattling mixes of So Strong by FINDLING ZIGON and SANTÉ, theres more bounce to the ounce in every way imaginable, making Nightporter a must-play for DJs and punters alike.