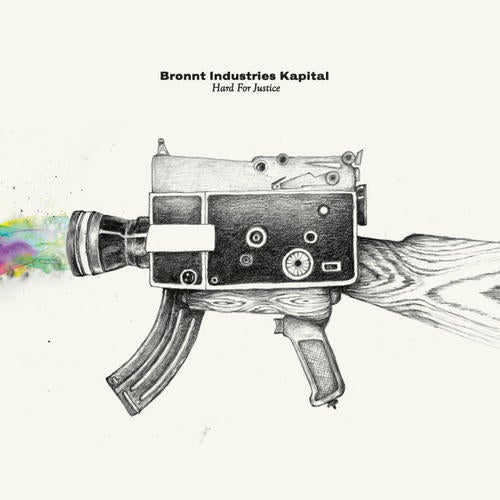 Please clench one fist tight and raise it slowly but purposefully into the air for Hard For Justice, the masterly new album from Bronnt Industries Kapital. Revolving around Bristol, UK-based producer/multi-instrumentalist Guy Bartell, Bronnt has spent eight years exploring deep frosts of electro-acoustic melancholy, slow-burning sonic terrain and uncharted detours into the absurd. Hard For Justice, however, will blow away any lingering preconceptions with a phallic flourish of a Colt 45. In open homage to the spirit of 80s Hollywood vigilante cinema, low-rent sci-fi, Italian fright flicks and the music of Goblin, Neu! and Giorgio Moroder, this eight-track suite is precision-engineered to unleash endless horror on the dance floor. Hard For Justice is front-loaded with an arsenal of synth-funk bullets that fizz with thrilling John Carpenter electronics ('An Index Of Corporate Art', 'Knights Of Vipco', 'Streets Of Fury'), bristle with low-end Motorik finesse ('Objects & Purpose') and bubble over with HI-NRG Giallo-disco pulsations (S.T.R.Y.K.E.R.). And while the epic dystopian gloaming of Bronnt's earlier work fleetingly descends on 'European Male' and heartbreaking closer 'Unbelievable Computer Of Love'…you will, ultimately, die dancing. If Hard For Justice were a film it would probably star Steven Siegal in his prime, go straight to video and be mangled by the machine on first viewing: for Bronnt Industries Kapital, there could be no higher compliment than that. Hard For Justice is the third full-length album by Bronnt Industries Kapital: the previous two Virtute et Industria (2005) and Häxan (2008, a soundtrack to the 1920s silent witchcraft movie of the same name, commissioned by Tartan Films) were released by revered UK independent imprint Static Caravan. The album features three tracks co-written with long-term collaborator Nick Talbot of Gravenhurst (Warp Records).