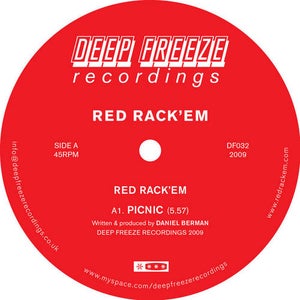 In 2009 Deep Freeze will be dipping back into the original House sounds of Chicago and Detroit that inspired the imprint to come to life in the first place. And to kick this journey off they couldn't have come across a more perfect sound than that of up and coming producer Red Rack'em. Red Rack'em aka Daniel Berman is a producer and DJ who has been attracting a lot of attention recently. His wonky disco/boogie/house output as Hot Coins on Tirk, Untracked and Society has been receiving massive support from DJs like Carl Craig, Prins Thomas and The Unabombers. Gilles Peterson is also a big fan of Danny's productions and recently had him perform at his Worldwide Awards show in London alongside Jazzanova and Laurent Garnier. Prior to releasing his own original productions, Danny established himself as a force to be reckoned with through a series of illicit hip hop and disco edits. He is a DJ and a producer who draws from diverse sources of inspiration to produce his own unique sound, a sound that he also showcases on his weekly Smugglers Inn podcasts which are eagerly downloaded by beat freaks across the Globe. For this release, Danny hits play with a track called 'Picnic' which pays homage to the classic sound of Detroit. A lush electronic soundscape, 'Picnic' just gets better on every listen revealing more and more levels of subtle sophistication and depth, while never losing sight of its need to move the dancefloor. On the flip, Crowd Scene is a moody, atmospheric masterpiece which hangs together beautifully in a way that few except Kenny Dixon Jr have ever managed to pull off. Having developed this sound in the lab for some time these compositions are the first House inspired productions Red Rack'em has released, and we think you will agree he has come up with something rather special. Take note the House sound of Red Rack'em is here! And to highlight our journey back into House music even more, we have brought on board the mighty remix talents of The Revenge for this release. Having first released on Deep Freeze back in 2004 along with co-producer Harri from Subculture on the amazing 'Sayin Nuthin', The Revenge picks up where he left off and reworks 'Picnic' into an absolutely stunning remix that shows off his own particular debt to the old school House sound.