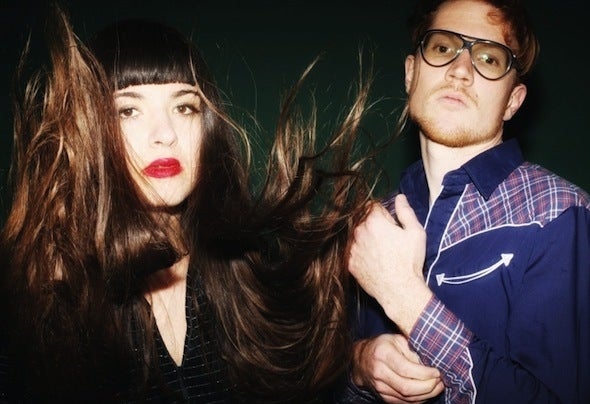 Two indefatigable genre crossers indulge in pop: on the debut album “Earthly Powers” (release date:13th May 2011), the smashing duo Pollyester from Southern-Germany experiments with far out hooklines in a kraut-disco. With their worldwide acclaimed EPs on their own Imprint Love in C Minor and on Permanent Vacation, Polina Lapkovskaja alias Polly and Manuel da Coll alias Yossarian have already established themselves as a contemporary producer duo full of surprises. Since 2007, Pollyester combine the duo’s wide range of musical experiences from both of their diverse other projects. Manuel da Coll also sparks storms of enthusiasm as the drummer of the world famous Bavarian Balkan-brass-punk-quintet La Brass Banda. Polly earned great respect as a member of neo-postpunk-band Kamerakino. For Gomma Records disco band Munk Polly played the bass, infusing funky glamour to Munk’s live performances; for the debut album of Munich krautrock newcomers Salewski she plucked the strings as well. As if this weren’t impressing enough already, Polly’s voice also ennobled three tracks of the debut album “Tuning Echoes” by London producers Mock & Toof. As for now, however, all main and side projects are set at rest as Pollyester have recorded twelve songs, which will certainly boost them around the pop globe. Somewhere in between Stereolab, Les Rita Mitsouko, Siouxsie Siuox, The Slits, Can, Chrisma and Nico the Munich duo has made themselves comfortable with their electronic sizzling. They don’t steal and they don’t imitate, just here and there a few flashes of recognition will hit brains with pop music schooling, only to evaporate in the duo’s unique sound amalgam the next moment. A sound that inexorably bores itself into the body with an analogue strength and plenty of catchy tunes without letting itself reduce to one explicit style. Similar to contemporary North-American newcomers such as Rainbow Arabia, Peaking Lights or The Soft Moon, Pollyester are not interested in any genre labeling and playfully jump between spooky and euphoric atmospheres. Tribal rhythms, energetic krautrock, disco strings and Witch-House-moments are equal partners in their kaleidoscope arrangements. All of them magically glisten thanks to Polly’s cool emotional speech song and promote double bottom pop that clings to the listener and at the same time sounds somehow bitchy. The music is topped by Polly’s surreal lyrics, all of which loop themselves into the brains of listeners with their mantra choruses and project nightly metropoli- tan neon-stories on the inner screen. The British press already labeled the duo as “Cosmic Disco” thanks to their psychedelic energy, however, with the supplementary “Lindstrom on Mescalin”. A nice compliment that forgets to mention, though, that Pollyester ignite their unique space shuttle fuel and no matter what speed they play and with what atmosphere they toy they rotate in their own orbit with their boogie basshooks, their twinkling synthesizer melodies and their twisted grooves.